Back in the day, when I was in school, the chess players were the nerds, the bookworms, the boys wearing the horn-rimmed glasses. There was something about them that was, well, a little different.

But there was a time in the early 70s when chess became kind of cool, even sexy. It was a time when chess even became a televised sport. (Don't laugh - if people will actually watch poker on TV, then anything's possible.) Chess was another weapon of the Cold War, wedged somewhere in between the space race and the Olympic hockey team; and chess players were the new scientists or classical musicians, so square they were hip. One man was primarily responsible for that transformation: Bobby Fischer. 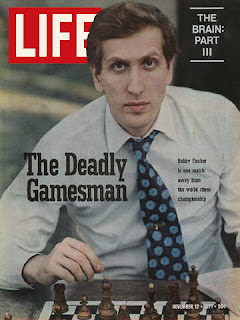 When he defeated the evil Boris Spassky (he was a Russian, after all; he had to be evil, if not a Commie) in 1972 to become world chess championship, he also became an American hero, albeit for a very short time. About the time it took to go from an eccentric chess master to a full-blown nutjob.

He was an American champion at 14, a grand master at 15, and world champion at 29. He was tall, youthful and good-looking, the latest matinee idol. His magnetism positioned him to capture the sports spotlight. But, like those chess players we knew in school, Fischer was always a bit odd, seeing conspiracies behind every tree, under every bed. He was always storming out of matches, seeing photographers, journalists, foreign officials (he once referred to the Soviets as "Commie cheats," which endeared him even more to America) and even the lighting guy as potential adversaries. Was it gamesmanship or were we seeing the "idiosyncrasies" of a true paranoid? Were the symptoms there in the young Fischer; was there something in his drive for chess success at such a young age that left him scarred forever? We may never know, although his life should be a harsh lesson for any parents who have seen their children come to great success (athletic or otherwise) at an early stage of life, a time when it is far better to be just a kid.

Fischer gave up his title without ever having defended it, refusing to play Anatoly Karpov. As his grew, his star faded, a comet flaring out, until he was a mostly forgotten champion. He became a ravenous anti-American and anti-Semite - he said 9/11 was a good thing and that America should be "wiped out," and called Jews "thieving, lying bastards." Not only had his elevator ceased going to the top floors, it seldom seemed to emerge from the basement. He renounced his American citizenship and spent the last years of his life in Iceland, where he was still remembered for what he had been, rather than what he had become.

Garry Kasparov, the great Russian champion and anti-Communist, was quoted today as saying, "The tragedy is that he left this world too early, and his extravagant life and scandalous statements did not contribute to the popularity of chess." And that is probably about the best way to put it. Bobby Fischer, who died today of kidney failure at 64, was an icon of the 70s, a mad genius, a great chess player who threw it all away, a victim of his own mind, and he died a mere characture of his former greatness.