The Rat Pack in Heaven

A few days before Christmas, I was walking home from work. My regular route takes me past one of those establishments which is often euphemistically referred to as a “gentleman’s club,” the term “gentleman” being applied to various degrees depending on its degree of appeal to the hoi polloi (i.e. truck drivers or professional athletes).

At any rate, what caught my eye was a sign in the window featuring a portrait of what looked to be a Vargas girl dressed up in a Santa suit (or, at least, what Santa would wear if he were in fact a Vargas girl), with an appeal for “Toys for Tots.”

OK, I thought. I suppose even in a place like this people aren’t immune to the spirit of the season and the desire to help out the less fortunate, especially children. If their appeal brings a little happiness to some poor kids at Christmas who don’t have much, then bless their hearts, even if they are a little degenerate.

Upon closer inspection (yes, the things I do for my readers), the sign turned out to be for something that wasn’t quite “Toys for Tots,” although it was close. (I’ll leave it to your imagination as to what it really said although, as they say, consider the source.) But as I continued home, I wasn’t quite able to shake off this thought of strippers colleting toys for kids, and what it all meant.

Most of us believe, to one degree or another, that there is an innate desire within everyone toward goodness. We think, or like to think, that even the meanest, the most irascible, the least pleasant people we know, are all capable of unexpected acts of kindness, even if they’re few and far between. Why these acts of kindness should have to struggle to emerge is just one of those mysteries of life. 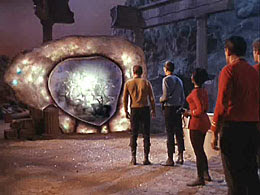 In Harlan Ellison’s original script for the classic Star Trek episode “The City on the Edge of Forever,” we are presented with a Spock whose logic is at a loss to explain why a character who is “amoral, evil, a killer. Selfish and capable of anything,” would still risk his own life to save the life of another. Kirk, who understands humanity in a way that Spock cannot, can only offer a philosophical reply:

We look at our race, this parade of men and women, and the unbelievable harm and cruelty they do. And we sigh and we say, “Perhaps our time is past, let the sharks or the cockroaches take over.” And then, without knowing why, without even thinking of it, the worst among us does the great thing, the noble deed, that spark of impossible human godliness. And we say, “Perhaps the human race is entitled to a little more sufferance. Let them keep trying to reach the dream.”

Spock, understanding, sums it up: “Evil can come from Good, and Good from Evil.”

Which brings me, in a roundabout way, to the title of this piece. Ah, The Rat Pack - Frank, Dean, Sammy, Joey and Peter (the one everyone forgets). The other night I was watching an old Frank Sinatra TV special from the mid 60s. What a talented man, I thought: charasmatic, confident, able to phrase a lyric like nobody's business. Great actor. Generous, both with his talent and with his money. And, as many people have written, a pretty nasty guy as well: abusive, domineering, thin-skinned, four-times married, a brawler, a dropper of friends at the smallest provocation. 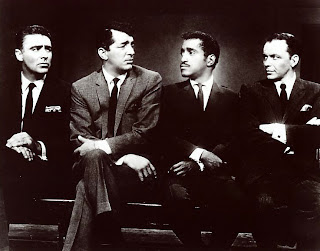 Yeah, Frank was a very tough, very complex guy. The rest of the Pack, though perhaps not as flamboyant as Sinatra, had their own share of flaws - infidelity and divorce, drug and alcohol abuse, arrogance and distain, selfishness and cold-blooded business dealings. Sammy converts to Judaism, and you have to wonder about that. Heaven knows I'm not trying to point fingers here; we all have our own share of flaws, and in proportion ours could well be even worse that that. But it goes to show, as I mentioned earlier, that the human animal is not only a very complex one, but most illogical as well. You look at a celebrity - a movie star, an athlete, a politician, or Frank Sinatra - and you struggle to reconcile their feats and their flaws, their tenderness and their cruelty. On the one hand you marvel at the gift, on the other you despair at the waste. Maybe you feel guilty for liking them so, knowing what you do about them; maybe you make excuses or try to understand, but you can't stop liking them anyway.

Flaunting many of the rules of common decency, treating several of the Commandments with distain - truly, you worry about someone's mortal soul in a case like this. But, you think, there must be some kind of trade-off here. How can someone cause such pain, hurt, humiliation - and at the same time touch you in such a way that produces delight and wonder? There must be something about the charity, the generosity, the simple pleasure and entertainment that they provided for people - that couldn't all be for naught, could it? It has to count for something, you think.

And so you resort to the great bastion of Christianity - hope. You dare to hope that God, in His infinite wisdom and justice, will temper His justice with mercy. You think of the joy you experienced, the memories you have, you recall the generosity you received - and you hope. You trust, because you know that God's judgement is perfect, but you still hope.

Avery Cardinal Dulles writes at length on the population of Hell, addressing the question as to whether or not we can dare to hope that all will be saved. Salvation, we know, is offered to all, even though not all will choose it. As Paul writes, the gospel contains “the power of God for salvation to everyone who has faith” (Rom. 1:16). So we look at The Rat Pack, we love them for the pleasure they gave us, how we laughed at their jokes and thrilled at their talent, how we listened to their music and for a while felt young again. And we hope.

Ultimately, as it should be, salvation remains a mystery of God's province. And while mystery often causes doubt, it also creates hope. As Cardinal Dulles writes,

Paul, without denying the likelihood that some sinners will die without sufficient repentance, teaches that the grace of Christ is more powerful than sin: “Where sin increased, grace abounded all the more” (Romans 5:20). Passages such as these permit us to hope that very many, if not all, will be saved.

That, indeed, is hopeful. So do we dare to hope that The Rat Pack, for all their flaws and imperfections, are there with the rest of the saints, playing their heavenly music even if their halos might be a bit tarnished? Such a hope might seem to some to be most illogical. But humans, as Spock found out, are most illogical beings.