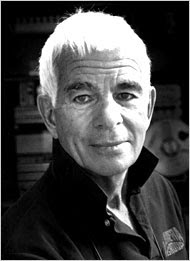 Longtime readers will recognize Kirk Browning as the director of the premiere telecast of Amahl and the Night Visitors in 1951. He was, therefore, one of the few major figures remaining from the Golden Age of Television and one of the last to still be active in television production, which he was right up until his death on Sunday at age 86.

Kirk Browning started out as a chicken farmer and wound up as one of the icons of the technical side of the tube. His obit in the New York Times relates the wonderful story of how one of his egg customers, Samuel Chotzinoff, the director of NBC’s music division, helped get him a job with the network. He worked with everyone from Arturo Toscanini to Frank Sinatra to Arthur Godfrey in a career that ran from 1947 to 2008, and his productions won 10 Emmy Awards.

It was for classical programming that he became most famous however, as director of the long-running PBS series Life From Lincoln Center. He directed 185 telecasts, and was in fact working on the post-production of the March telecast at the time of his death. He was known for his innovative techniques, including his use of sports technology such as the small "lipstick" camera, to generate views for the television audience that no person in the concert hall could ever see.

And it would require an innovative mind for perhaps the single most enduring program with which Browning was involved, the 1951 telecast of Amahl. Browning often said that the opera's composer, Gian Carlo Menotti, was the decisive force in the production, but there is no question that it was Browning's skill and understanding as a director that shaped the production of television on opera. It is difficult to appreciate the complexity of putting on that live broadcast; Browning and Menotti worked closely to frame the action on the small screen, to block out the camera angles, to create an air of intimacy that would itself be an innovation in the world of opera. Singers used to broad gestures would have to contrict themselves so that their movements would not break the frame of the screen. Camera shots would have to be orchestrated in such a way that the noise generated by the lens change would not be heard on the telecast. Closed-circuit hookups would be arranged so that the orchestra, working from a separate area behind the set, would still remain in visual contact with the singers. And all this would be done, live, in an environment where union rules prohibited the television director (Browning) from communicating directly with the cameramen - all such communication would have to go through a technical director.

Needless to say, it worked - not just with Amahl, but with the hundreds of shows on which Browning worked through a half-century of television. Working in a brand-new medium frequently results in genius born of necessity, and the work of Kirt Browning, then as now, was just that.