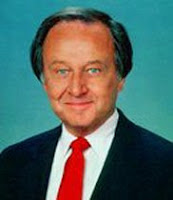 Jim McKay was one of what I once called the "big game" announcers: whenever you heard his voice on television, you knew there was something big going on. Unlike most of the other announcers in that category - Curt Gowdy, Pat Summerall, Lindsay Nelson, for example - Jim McKay wasn't necessarily doing the biggest game in town - but there was something about him that made whatever he was doing important.

That's not to say that, in a lifetime spent "spanning the globe," McKay didn't cover the big events. The Olympics, the Masters, U.S., and British Opens, the Indy 500, the Grand Prix of Monaco and the 24 hours of LeMans, the Grey Cup, the World Cup, the Kentucky Derby, Wimbledon, figure skating, track and field - how's that for starters?

But Jim McKay had that rare ability to transcend the event he was covering, to make it important because the people participating in it were important. And for McKay, anyone taking part in an athletic event was important. In his charming autobiography The Real McKay, he tells the story of being in Islip, New York covering a demolition derby for Wide World of Sports. Interviewing the winner, McKay was inclined to treat the whole thing as a lark. But it was no lark to the winner, who had just won the demolition derby "world championship" and discussed his strategy as seriously as would any other athlete. McKay learned a valuable lesson that day: "I had committed an unforgivable bit of gaucherie, looking down on this man in a condescending manner during what he considered the greatest moment of his life." From then on, McKay said, he tried to approach all sports "through the eyes of its competitors."

We should also remember that Jim McKay didn't start out in sports, nor did he start out with the name McKay. His real name was Jim McManus, and he got his television start in Baltimore, as a serious news journalist. He worked with people like Douglas Edwards, interviewed scientists, and covered presidential inaugurations, or at least the parades. When he became host of a daily variety show in Baltimore, he was asked to change his last name so that the show could be called "The Real McKay." He did so, grudgingly, but always thought of himself as McManus and retained the name for the family that played such an important role in his life.

It should be no surprise, then, that McKay proved himself more than equal to the task at his most famous, and most tragic, appearance - covering the massacre of the Israeli athletes at the 1972 Munich Olympics. He won a Peabody for that, to go along with the Emmys that would mark his stellar career. They were all well deserved.

There was also McKay the family man; he refered to he and his wife Margaret as "a team," and credited that "team" for much of his professional and personal success. He understood that hard work was essential to a successful marriage and family, and believed that a common faith and shared interests had much to do with it. He was proud of his son, Sean McManus, who became president of CBS sports and news, and equally proud of his daughter Mary, a counselor. Of the life he and his wife shared, he wrote, "There is little more we could ask for."

McKay always felt it was a priviledge to have the job he had, to see the places and cover the events to which he was taken on Wide World, but in fact the priviledge was ours as well, to be able to hear him take us there. He was one of the last of a (literally) dying breed, the sportscaster who put the game ahead of himself. Vin Scully, Pat Summerall, Dick Enberg - the numbers seem to dwindle every time we turn around.

"They're all gone," Jim McKay famously said as word was passed to him of the deaths of the Israeli athletes at the Olympics. With his passing today, the giants of sports broadcasting are one step closer to being all gone as well.