(ELK RIVER, MN – October 11) Millionaire businessman Tom Petters today announced his sponsorship of an Indy Racing League team for the 2009 season, and that he had signed two-time Indianapolis 500 champ Helio Castroneves as his principal driver. 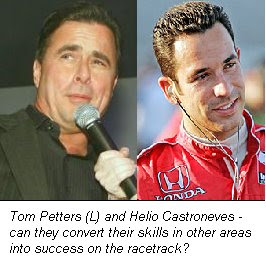 Speaking from the Sherburne County jail in Elk River, MN, where he is currently being held on charges of mail and wire fraud, money laundering and obstruction of justice, Petters announced the partnership with Castroneves, who was the big winner in 2007’s “Dancing with the Stars” and is presently under federal indictment for conspiracy and tax evasion.

“It was a no-brainer,” Petters said of the Castroneves signing. “Helio and I have a great many interests in common. Our common background and shared passion made this a natural relationship. We’re also pretty creative in figuring out ways to stay one step ahead of the . . . competition.”

Smiling through a glass partition at reporters who had gathered in the visitors' center at the jail, Petters added, "Helio's a winner. They don't call him the 'Spider Man' for nothing. His tradition of climbing the fence after race victories could come in quite handy for 'Team Petters' in the future."

Petters spoke optimistically about his new venture, which would mark his initial foray into motor sports. Castroneves, who won 12 Indycar victories racing for Roger Penske, will drive the number 02158758 car for Team Petters, sporting a distinctive black-and-white striped color scheme. Petters said the car would run a limited IRL schedule in 2009, competing only in races in Algeria , China , Saudi Arabia , Zimbabwe , and other countries which currently lack an extradition treaty with the United States . He said that in future years, races held in Caribbean island countries might be added to the schedule.

“People might be wondering how we’ll be able to pull this off,” said Petters, speaking rapidly as his phone call minutes dwindled away. “But we’re not going to let little things - external distractions like multiple felony indictments, possible life imprisonment - get in our way. We're focused! We’re winners! But I’ve go to go now, we’re having chipped beef on toast for dinner.”

A spokesman for Team Petters said that the Petters-Castroneves partnership would extend to shared services for their upcoming criminal trials, and did not rule out the possibility of asking federal authorities for a joint trial, even though the two men have been charged with separate crimes. "A good legal defense is like a good pit crew," he said. "You need teamwork and cooperation all around."

He added that sponsorships and other financing details for Team Petters were still under discussion at press time.

Email ThisBlogThis!Share to TwitterShare to FacebookShare to Pinterest
Labels: Crime, Humor, Sports, This Just In