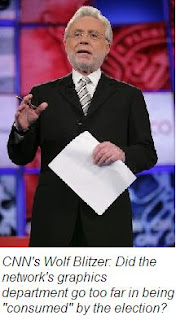 Just as the announcer stepped up to the gargantuan display to marvel at CNN's amazing technical achievement, the screen split itself along the Mason-Dixon line and ate Blitzer. "It wasn't two or three bites," recounts boom microphone opperator Joe Holditup. "I was just, like, standing there and it took him down whole. I am shocked, as you can see from the shocked expression on my face."

Fellow CNN anchor Anderson Cooper appeared less surprised. "You could see the Nation licking its chops around the Gulf for weeks," Cooper explained. "Times are tough and clearly we ran out of interns."

There is no word yet as to whether search and rescue operations for Blitzer will be successful, as the Map has retreated to a far closet of the CNN Newsroom. Currently the country hangs in the balance, as citizens are unwilling to follow conventional news coverage with non-interactive maps. In fact, according to CNN political analyst Bill Schneider, most Americans probably will not know the outcome of the election until the Map resurfaces. To follow this story, let's go to the new and improved interactive map in the newsroom for more on the crisis...