The Aqueducts of France; or How I was Duped on My Trip to France.

A few weeks ago I was across the Atlantic, waking up in southern France, ready to enjoy a day of sightseeing and touring. I was visiting my sister, Kate, in Montpellier who was studying at the university. She had been there for almost 4 months and knew the town well. While she was taking an exam, my traveling companion, Erik, and I set out, with Kate’s detailed instructions, to explore Montpellier. We had a few maps printed out, and the ever necessary tourist map from the hotel. Our back pack was loaded with water, snacks and umbrellas. We were ready. 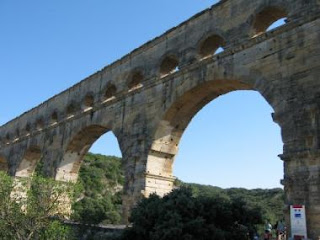 One of the major points of interest in Montpellier is the Aqueduct. Before we left for our trip, Erik had researched the area and found this site. Both having history degrees, the aqueducts moved quickly to the top of our list of things to see on our trip. We took time wandering through out the winding streets. One trait of many European towns are the shops. Instead of selling a variety of ‘French’, each store was specific in its product. There were top hat shops, cheese shops, olive oil shops, puffy shirt shops. Wide eyed and eager to see more, we made our way to the aqueduct.

The start of the water way was marked by a beautiful arch. I assume it was beautiful, only because it was covered by scaffolding. We stood in marvel. It was in pristine condition. The arches extended for over a mile down the road, ending beyond eyesight in a tree line. Aside from minor scratches and dents, the aqueduct was entirely intact. I couldn’t believe it! I was seeing a real part of history. Erik and I took turns posing in front of the structure, wanting to capture evidence that we had really been there. We walked along the road following the aqueduct taking pictures of the arches, the shadows in the arches, the shops behind the arches. It was wonderful.

Later that evening, we met up with Kate and her host family for a home cooked meal. It was really nice to see the home where she had been staying for the past few months. The meal was great. Roast, green beans, bread, salad and cheese for desert. With my limited French, I was able to talk about our day and convey our excitement about seeing the Roman Aqueduct. Kate’s host-mom, Marie-Christine, laughed and said, “Well, you know it is from the 1600’s, right?”. No, we did not in fact know it was from the 1600’s. How could we? All the web sights we had seen about it were in French. Erik’s jaw dropped. We had been duped, fooled, tricked! It was old, that was for sure, but not Roman old.

We left the dinner, full of good food, good conversation and good laughs, but still stunned about the age of our beloved aqueduct. After getting over the initial shock we decided that it was still cool to see it. After all, it’s not every day that you get to see an aqueduct, even if it is French.
Email ThisBlogThis!Share to TwitterShare to FacebookShare to Pinterest
Labels: History, Humor, Travel