*Come to think of it, so did Lucrezia – the eponymous opera by Donizetti, which was much better than Evita. But that's a subject for some future Opera Wednesday. 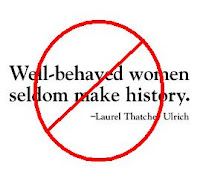 Queen Mary was so famous they named a drink after her – the Bloody Mary – which suggests she wasn't exactly a Miss Manners. Lizzie Borden, Imelda Marcos, Jiang Qing – all of them famous enough to enter popular culture, none of them what you would call paragons of model behavior. And we haven't even mentioned Madonna or Britney.

Are we sure these are the role models we want for young women?

I submit that the greatest trait of women (and men, for that matter) who make history has nothing to do with how well-behaved they are, but that they're countercultural. Mother Theresa, Florence Nightengale, Margaret Thatcher, Golda Meir, Saint Therese; these were women willing to fight for something they believed in, women who had faith in themselves but also had faith in something greater than themselves, women who reached high but did so with humility. Counterculturalism means breaking the mold, rather than breaking rules. These women, and many like them, didn't rebel against culture: they transcended it. And in doing so, they changed the world around them.

In my opinion, it's no mistake that the people who sport these purple bumper stickers have chosen to focus on behavior rather than the transcendence that comes from counterculturalism. To start with, let's be honest: if you're talking about people not being "well-behaved," then that must mean they've "misbehaved." And if you look at the women (and men, for that matter) who have changed the world for the better, you see something profoundly different from “misbehavior.”

Misbehavior isn’t an adult trait. It’s a sign of immaturity, something adolescents do. A temper tantrum is misbehavior. Talking back to your parents is misbehavior, and you'd usually get sent to your room without dinner for it. Chewing gum in school used to be misbehavior, although I suppose that's pretty tame today. The time-worn response to misbehavior used to be to tell someone to "grow up." However, since Americans today seem to have entered into a perpetual adolescence, I guess we can’t be surprised that misbehavior no longer carries the stigma it used to.

But the idea that "well-behaved women seldom make history" is a perfect catchphrase for this generation. It's short and catchy, and it's totally devoid of any logic whatsoever. It's the kind of phrase that people can feel good about. They can't explain it to you, but it makes them feel good, and in the end isn't that what's important? If there's one thing Oprah's taught us, it's that feelings are everything. And if you have this bumper sticker on the back of your car, or perhaps on the door to your office, I have no doubt that you feel good about it.

These people want to avoid the true rammifications that result from being countercultural. It doesn't simply mean being a contrarian, and it's not as easy as SpongeBob celebrating "Opposite Day." It often calls for deep and profound self-examination, and results in a commitment that not only transcends culture, but becomes a life-altering experience. It may mean you give up your friends, your harmless vices, everything that you enjoy and that you think is important to you. It calls for sacrifice and self-discipline, which we know are hardly the traits of one who misbehaves. It's not easy, and many times it doesn't "feel good," and worst of all others might not be able to see you doing it, so that you won't get credit for it. That's why you won't hear these people talk about it - not when it's easier to simply, well, misbehave and call attention to yourself. Sacrifice is so, you know, grown up.

Perhaps some day these people will get it, but I doubt it - they're too busy feeling good about themselves. In the meantime, the well-behaved women - the women who seek to transcend the culture - well, they probably don't have time to think much about it. They're too busy changing the world.