I distinctly remember the first time I figured out what Robert Novak was all about. It was during a misbegotten youth spent in politics, and it coincided with the first time I saw The McLaughlin Group on television. Back then, the regular panel featured John McLaughlin, of course, along with Pat Buchanan, Morton Kondracke, Jack Germond, and Novak. 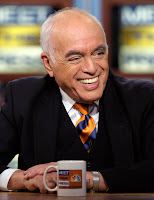 For some reason, I'd been under the impression that Novak and his writing partner, Rowland Evans, were more liberal. I'm not sure why I thought that, although Novak himself has mentioned that the duo became more conservative as the years went by; I was probably thinking of the Novak I'd read about in the early 60s.

At any rate, it didn't take but an episode for me to discover two things: first, that Bob Novak was no liberal; and second, that I liked his style. He understood that politics was a bare-knuckled business, and that you weren't going to get very far if you were afraid to speak your mind. (It reminds me of a piece of advice that I've always carried with me, from the first time I appeared on television, when the host said, in so many words, that if you had something to say, say it; don't wait to be asked for your opinion.)

He also knew what he was talking about, and he wasn't afraid to let you know it. (My favorite line of Novak's was when he would invariably tell McLaughlin, "John, you're wrong and I'll tell you why you're wrong.") With his chin thrust forward and his chest puffed out, wearing one of his typical three-piece suits, he would remind me of a bantam rooster.

Later, Novak would move on to CNN, where he starred on Crossfire. Different show, but the same Novak. I didn't always agree with him (the Gulf War was an example) but I always respected his opinion, and that fighting spirit of his seldom let you down.

It would be a mistake, though, to remember Robert Novak as "just" a television personality. He was, first and foremost, a reporter. He and Evans put out the Evans-Novak Political Report for over forty years (continuing alone after Evans died in 2001, although the name stayed the same), and for all that time it was must reading for anyone interested in what was going on inside the Beltway. His most famous moment of recent years was his involvement in the Valerie Plame affair, proving he could still find the spotlight. One of my favorite stories, however, was the quote he relayed from an unnamed U.S. Senator to the effect that Democratic presidential candidate (and later nominee) George McGovern was for "amnesty, abortion and acid," and that once middle-America found this out, McGovern's chances would be dead. Many people suspected that Novak manufactured the quote, but he insisted that it was genuine, and that the source had asked that his identity not be disclosed. This Novak honored until the Senator's death, when Novak revealed tha the source had been none other than Thomas Eagleton, who would go on to become McGovern's short-lived running mate. A political junkie has to love a story like that.

Novak wrote a wonderful autobiography with the marvelous title The Prince of Darkness. He reveled in that nickname, but it was hardly descriptive of the real man. His love for his family, his conversion to Catholicism, his belief in the founding principles of America, his infectious sense of humor, and the many loyal friends he left behind - all this provides evidence that, far from darkness, Robert Novak was a man who radiated light. May he soon see that eternal light in which he so fervently believed.