The Word Made Flesh 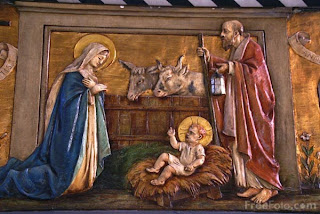 He came unto his own, and his own received him not. But as many as received him, he gave them power to be made the sons of God, to them that believe in his name. Who are born, not of blood, nor of the will of the flesh, nor of the will of man, but of God. And the Word was made flesh, and dwelt among us, (and we saw his glory, the glory as it were of the only begotten of the Father,) full of grace and truth. John beareth witness of him, and crieth out, saying: This was he of whom I spoke: He that shall come after me, is preferred before me: because he was before me.

Merry Christmas to one and all!
Email ThisBlogThis!Share to TwitterShare to FacebookShare to Pinterest
Labels: Christmas