by Mitchell Hadley
The best time to be thinking about your ideal job may be when you’re unemployed, as I am. Or, it could be the worst time. Best, because you have a chance to make your life over. Worst, because you also realize how unlikely getting paid for doing what you love really is. 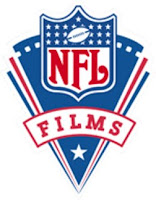 At any rate, I cannot imagine a more ideal job than working here – NFL Films. Always have felt that way, since I was a kid. And I doubt it will happen now; partly because they’ve been hurt by the economy just as other companies have, partly because I’m not much of a fan of the modern NFL, and partly because I don’t really want to move to New Jersey.
But it still looks like a great place to work, and anyone who’s seen the magic that came from them particularly in the 60s and 70s will know why I think that Ed and Steve Sabol are among the greatest documentarians ever – I’d put them up there with Ken and Ric Burns without any hesitation, maybe even a little ahead, and almost to the level of Bud Greenspan, who I think is our greatest modern documentarian.* Watching those programs on TV as a kid was sheer drama, just mesmerizing – the rain! the snow! the mud! All in slow motion with the voice of God in the background while using the greatest movie music since Miklós Rózsa.

*Where’s Michael Moore, you ask? No, you didn’t really ask.

Anyway, here’s an excellent article by Joe Posnanski, who as it turns out seems to feel the same way as I do. Maybe I won’t have the chance to get paid for doing what I love, but NFL Films still ranks #1 in my book. ◙
Email ThisBlogThis!Share to TwitterShare to FacebookShare to Pinterest
Labels: Sports, Television