Thinketh as The Thugocracy Beginneth

by Bobby Chang
I bowled with her son at a now-defunct bowling alley known for the 1968 uprising when it was an all-white bowling alley where three died (and the nearby public university's sports arena is named in memory of the three victims) in the protests. She is a Briton who has seen the nightmares of socialised medicine on the other side of the Atlantic Ocean, and had an interesting perspective on the issue, and it was referenced in today's local newspaper. 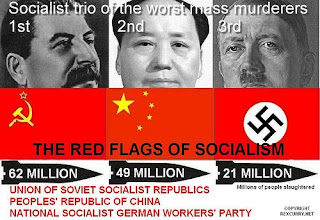 The socialised medicine rationing has me reminiscent of what could have happened to a college friend. A few years ago, she learned a serious growth had grown around her spine. She needed special surgery, and her symptom needs specialists. With the "death panel" that will consist of a majority of members selected by this thugocracy of the community organiser, they will likely say "her symptom is too expensive, you must die". This is a married mother of two children, not even 30, they want to kill with the federal health policy as it will be impossible to do such surgeries and experimental treatment (unless it is with babies killed under taxpayer orders) under the new orders of this régime. She was given her surgery and is still in rehabilitation, and still unable to be at her job years later, but thanks to a wonderful free market system of thinking outside the box and doing these necessary treatments, she is closer to returning to work and able to tend to her children. What if it was your friend or family member who has a similar symptom and with the new death panel, they ask she die instead of being able to be treated?

As we mourn our nation in this funeral, the final thought came to me was the education system. A generation of youth who were taught in textbooks that glorified Communism, attacked heroes of the nation, and praised every "heel" while attacking people such as our Founding Fathers, Patrick Henry, and George Patton, were indoctrinated enough in textbooks, peers, and popular culture to create this thugocracy. And it's not just health care that it's worked. They are the catalyst behind changing marriage laws to appease the pop culture they have learned through watching MTV and listening to their heroes every night. They are why churches are teaching "name it and proclaim it" false doctrine with rock tunes from such Life Enhancement Centres. The evils of Communism I learned through my A Beka textbooks in fifth grade history are no longer taught in our textbooks today. In those days, the logo for the Pensacola-based textbook publisher (named for the wife of the head of the college that owns it) was an owl reading a book (no longer used by A Beka). That owl symbolised intelligence. In today's corrupt education system, with the praise of Communism and the lack of knowledge of the dangerous CCCP, they would not be able to answer a fifth-grade question about the dangers of Communism as I was taught. As the Mark Burnett game show would say to today's generation that learned the false teachings that indoctrinated them into modern liberalism and could not answer that fifth-grade question correctly, these slaves of the modern liberal movement must come to the desk and say, "My name is Student of the Modern Liberal Movement, and we can promise hope and change in our way, but I am NOT smarter than a fifth grader." Instead of little owls being developed in schools today, we have skulls full of mush with only feelings, and not understanding. ◙
Email ThisBlogThis!Share to TwitterShare to FacebookShare to Pinterest
Labels: America, Healthcare, Politics