by Mitchell Hadley
Art Linkletter’s autobiography was entitled Confessions of a Happy Man, but that’s not to say it was without sorrow. He was given up for adoption as a baby, and said once that with every professional success he attained, he would hope that his natural parents were watching him, and regretting how they’d let him go. His daughter Dianne committed suicide in 1969, son Robert was killed in a car accident in 1980, son Jack (a TV host in his own right) died in 2007. 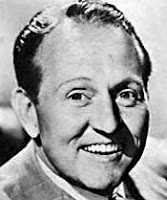 A TV Guide interview from the mid 60s suggests that his professional life wasn’t without its challenges either. A prickly relationship with fellow TV personality Ralph Edwards, a lost power struggle over a radio program (a temporary setback; Art would up getting the show back) – no, it wasn’t an easy road that Art Linkletter traveled in his 97 years.

What does all this mean? That life isn’t fair, perhaps? Linkletter once acknowledged the truth of it in an interview, but added “I'm an optimist. Even though I've had tragedies in my life, and I've seen a lot of difficult things, I still am an optimist."

That’s what made the difference. That’s why Art Linkletter could say he was a happy man. And that’s how he was able to bring so much happiness to other people, through a radio and television career that spanned three decades, and a legacy that went on even longer. His distinctive profile and familiar voice were household fixtures for the American public, back in the day.

Bill Cosby’s “Kids Say the Darndest Things”? That came from Art’s long-running daily show “House Party,” which wrapped up a seventeen-year run in 1969. Shows that forced audience members into ridiculous situations? That would be “People Are Funny,” the show that featured “things like throwing a pie in the face of a contestant who couldn't tell his Social Security number in five seconds, or asking him to go out and cash a check written on the side of a watermelon.” (Spoofed wonderfully in a Bugs Bunny cartoon that featured a program called “People Are Phony.” Daffy Duck was the foil, in case you doubted.) And we haven’t even touched on his best-selling books –his collection of "Darndest Things” stories was one of the biggest selling books of its time.  (And remains in print to this day.)

Yes, Art Linkletter was a throwback to another era, when television could be funny without being obscene, entertaining without being violent, uproarious without being demeaning. (He was also the rare television personality with a successful marriage – 75 years to the same woman.) His brand of entertainment was based on the positive rather than the negative, entertainment instead of existentialism. He was, as he said, an optimist.

As such, he faded somewhat into the background after leaving daily television, but even then he was never too far away for those who remembered him. He was a frequent guest on Larry King’s CNN show, where he would talk about how he surfed every morning to keep in shape. His daughter’s death turned him into a crusader against drug use, and in later years he became affiliated with a senior organization that challenged AARP and its liberal political agenda.

It’s appropriate in a way that his death today came in the middle of our Retro TV Week here at Our Word, because Art Linkletter truly was a major part of the cultural history of the 50s and 60s. I feel sorry for those unaware of who he was (too many in that category, unfortunately), or who never had the chance to appreciate him. They don’t know what they missed. We do, and what we’ll particularly miss is that he won’t be around anymore to remind us. But we have his books to fall back on, and the stray recording of one of his television appearances. And the memories, which stay with us as, of course, they are meant to.  ◙
Email ThisBlogThis!Share to TwitterShare to FacebookShare to Pinterest
Labels: Obituaries, Television