This Just In Classic

HOLLYWOOD, CA – In what’s expected to be a ratings blockbuster, CBS-TV announced yesterday that a three-hour special on the life of the late Frank Barone, patriarch of the hit sitcom Everybody Loves Raymond, will air this Sunday evening, which is Christmas Eve.

Barone, in the person of actor Peter Boyle, passed away last week from cancer and heart disease at the age of 71. 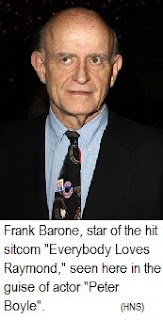 "Frank Barone: Really Home for the Holidays” will focus on the life and family relationships of Frank Barone. “He was an irascible character that everybody really did love, even though he could be a little cranky and rough-edged,” said show producer Harvey Peterman. “He epitomized what a lot of us wanted our fathers to be.”

Cast members of the show, speaking at a hastily arranged news conference in the lobby of the building where the Boyles lived in New York City , said they are pleased the project is being rushed into production and expect it to do well.

“Peter, I mean Frank, I mean Dad would be really happy with this,” said series star and co-producer Ray Romano. “Besides, adding this to our current syndication package is a no-brainer. We’re talking mega-millions.”

Doris Roberts, who played Frank’s wife on the show, struggled through tears to express her support. “My husband was a wonderful man. Losing him so suddenly like this has left a huge hole in my life, and made for a difficult week. This show – on Sunday night at 9 p.m., 8 p.m. Central, check your local listings – will help all of us handle our grief a little easier. It will provide the closure that all final episodes should have.”

Meanwhile, lawyers for the Boyle family, including the wife and children of the late actor, have filed a lawsuit for civil damages in the wake of the family being barred from attending the Barone funeral, which was held earlier this week in a small chapel on Larry King’s estate in west Hollywood.

“We’re sensitive to that,” said CBS executive Marvin Goldblast. “We know that the ‘Peter Boyle’ aspect of Frank Barone’s life meant a great deal to them. There will be a time and place for them to grieve. But it isn’t now. We felt their presence would have been confusing to the American public that has invited the Barones into their living room every Monday night for the last nine years – never mind the syndication schedule, which is pretty much set up for eternity.”

The announcement that the show will be re-broadcast later Sunday night directly opposite the live telecast of Pope Benedict’s Midnight Mass from St. Peter’s Basilica on Christmas Eve, has drawn some criticism. “Sure the Pope is the Pope and a lot of people and shut-ins look forward to that telecast,” said Goldblast. “But, frankly, we expect the Barone special to blow it out of the water.”
Email ThisBlogThis!Share to TwitterShare to FacebookShare to Pinterest
Labels: Humor, Television, This Just In