by Mitchell Hadley
Here's one last blast of advertising that we find in the "Community Magazine" from Albert Lea, MN for Christmas, 1962. (Click for parts one and two.)

I like the sentiment in this - "Let us thank you for your past patronage."  Remember that the customer is doing you a favor.  A lot of businesses don't remember that anymore. 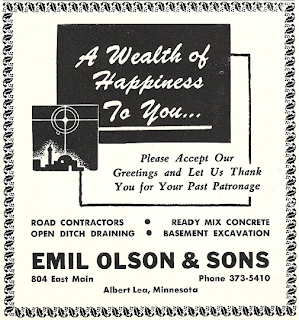 Christmastide - now there's a word you don't hear very often.  Sounds vaguely liturgical, doesn't it?  Also serves as a reminder that Christmas is more than one day.  They could have been talking about the lead-up to Christmas - or they could mean the whole twelve days, leading up to Epiphany.

Remember when carolers used to come to the front door?  Maybe they still do - just not here. 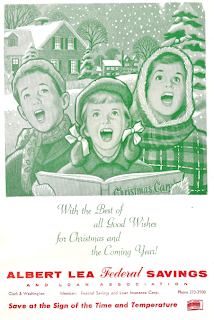 Another ad with candles - I really wish we saw more like this.  Notice too how many advertisers wish us something along the lines of "health and happiness"? 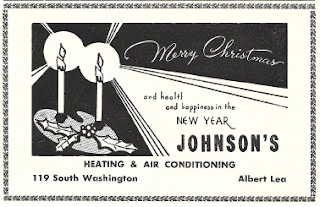 Another image of the Virgin and Child.  I can guarantee you wouldn't see this today - again, at least not here. 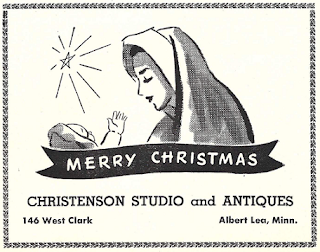 "Best wishes of the season" - with an image like this, there isn't much doubt as to what season they're talking about.  Remarkable how many of these ads have a religious motif. 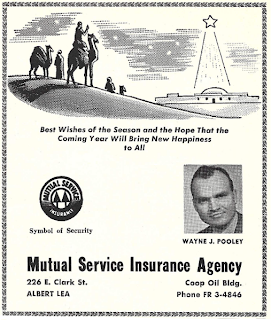 Another image of the Wise Men. 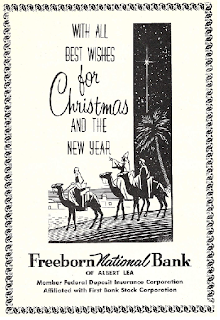 This looks a lot like the snowdrifts we're experiencing here in Minnesota! 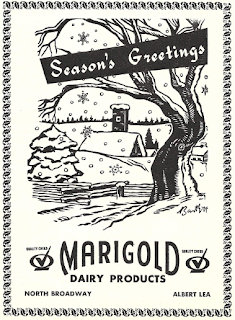 Finally, Reddy Kilowatt wishes us all a Merry Christmas.  And, by the way, don't forget to use that electricity! 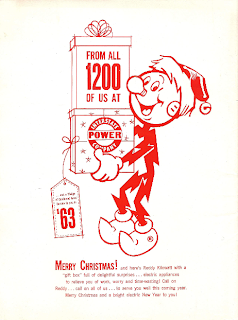 I don't know about you, but I enjoyed going through these ads immensely.  There was only one sour note in the issue (aside from the sense that this is a world lost to us forever), and that comes in what I suppose we'd call the "predictions" section of the magazine.  The column concludes with a prediction of "a year that lies before us clean and untouched.  May it bring joy and successto us and to you."  Indeed, the year was to bring the death of John XXIII, the continuing "work" of the Second Vatican Council, the overthrow of the president of South Vietnam and continuing U.S. involvement, the assassination of President Kennedy, the murder - live on national television - of his accused assassin, the death of C.S. Lewis - well, you get the picture.  Knowing how the year turns out adds an extra note of poignancy to the optimistic hopes for the year.  When, in 50 years, historians look back at 2011, I hope they will see better news. ◙

Email ThisBlogThis!Share to TwitterShare to FacebookShare to Pinterest
Labels: Christmas