by Mitchell Hadley
From the pages of a 50-year-old TV Guide, here's a look at the inauguration of John F. Kennedy as it was on Friday, January 20, 1961. As always, click on the images for a closer look.

Gee, you'd think this was a big deal or something.  Seriously, there is still something charming, not to say awe-inspiring, about the reverence with which "Inauguration Day" was proclaimed.  It was, regardless of your party affiilation, a day to be proud, yet another example of the peaceful transition of power from one man to another, and one party to another. 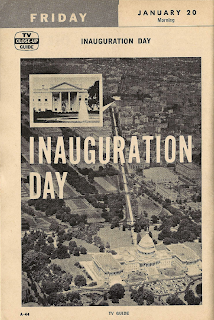 I like how the day begins with Captain Kangaroo explaining to the kids what's about to happen.  Note the ad at the bottom of the page, an ominous precursor to today's modern politics. 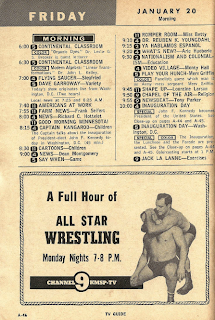 Here's the full line-up of the day's activities.  You get the feeling that the Inaugural Committee was inviting everyone, not just the people in Washington, to be witnesses to history. 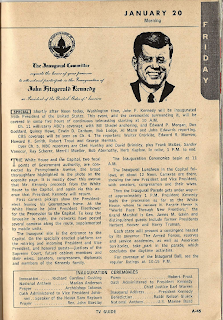 As promised, CBS and NBC offer coverage of the "doings" at the Inaugural Ball.  There were only three balls in 1961; I don't recall how many there are today.  Also, I wonder how odd it must have been for people at the time to see a reference to "President John F. Kennedy," after eight years of President Eisenhower. 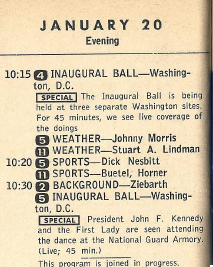 Finally, in the articles section, a nice graphic accompanying a story on coverage of the inauguration, and a reminder that television is still something of a modern marvel in 1961. 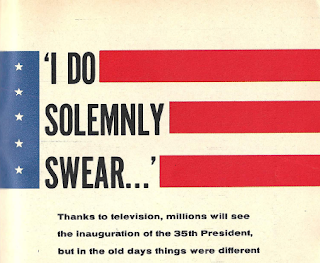 Fifty years ago yesterday - not really all that long ago, in the relative ways of history, and yet a lifetime and then some.  Back then it was the youngest man ever elected president, the changing of the guard, the Democrats returning to power.  I wonder what the story will be two years from now? ◙
Email ThisBlogThis!Share to TwitterShare to FacebookShare to Pinterest
Labels: Politics, Television, TV Guide