by Mitchell Hadley
I love this cartoon, drawn by Jeff MacNelly for a National Review calendar in the early 90s.  Ronald Reagan, king of the jungle, by that time the lion at rest. 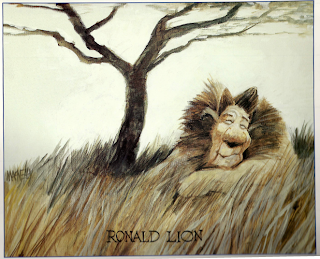 The liberals try to claim that today's Republican Party would be too conservative even for Reagan, that he was more liberal than his admirers make him out to be, that he's more myth than man.  Bunk.  The man wasn't perfect; what man is?  His presidency wasn't everything it could have or perhaps should have been.  Was anyone else's?  Yes, there were tax increases.  Yes, we still had abortion.  Yes, he fell short in terms of choosing a running mate (perhaps the only area in which George H.W. did a better job).

But Ronald Reagan believed in something, and had the courage to allow that belief to inform the actions of his presidency.  He carried himself with grace and humor and dignity. He told people to believe in and be proud of their country, and then through his actions made it possible for them to do so.  He didn't let his skirt blow up in his face; he was a man.

And something else: Dean Martin once said that he, Frank Sinatra and Sammy Davis Jr. had switched their support from Democrats to Ronald Reagan because Reagan was "cool".  Who better than the Rat Pack to define that?

Ah, such a difference between leaders then and leaders now.  Reagan came to lead America during a bleak time, when many had come to despair in the future.  In that sense, it was the misguided presidency of Ford and the incompetent presidency of Carter that made Reagan possible.  There is room for hope then, even in the presidency of Obama, that from it better times can and will emerge. ◙
Email ThisBlogThis!Share to TwitterShare to FacebookShare to Pinterest
Labels: Reagan