After a second Brazilian Touring Car fatality (this time in the lower-tier "Utes," as our Australian friends call them, after the V8 Supercar Series' lower-tier series) in four years at the same section in question, and second overall fatality this year (a February track day led to the death of a motorcyclist in the same section) at Autodromo Jose Carlos Pace, calls for the run to the pit straight through Subida dos Boxes and Curva do Cafe to be changed erupted. A SAFER barrier was installed in the section in question last year before the F1 race, and a chicane was installed for motorcycles, and used in the Brazilian Touring Cars. But the controversy over this is continuing. Confederacao Brasileira de Automobilismo has asked the FIA for help. 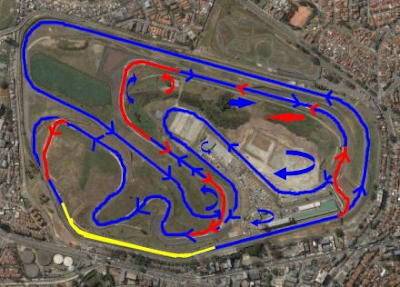 Blue: Old Section (arrows note direction; there are changes in direction in the 1980's track truncation; F1 first raced on the truncated Interlagos in 1990)

A permanent yellow flag (no overtaking allowed) is being installed for a few race meets, but the idea of demolishing a section of seating in order to add more runoff is being considered. The lack of runoff at the section in question is the main criticism. Another potential fix could be using the old Juncao (the last part of the track that was changed in the run to the finish) and adding a chicane where the present Juncao sits or expanding the current chicane built for motorcycle racing (roughly in the blue between the red and yellow past Juncao into Subida dos Boxes)..

This will be an interesting story as we get closer to the end of the season to see what happens.

UPDATE: CBA has confirmed there will be a new runoff section in the questionable section, meaning seats will be removed.

Video of the chicane in a Brazilian Touring Car event:.
Joe Saward's take.