by Mitchell Hadley
I've had occasion recently to spend some time rooting around the online archives of the Indianapolis 500, reading articles, watching videos, and listening to audio. By far Johnson's Indy 500 is the best site on the net for historical data - it even tells you who's sung "Back Home Again in Indiana" over the years. 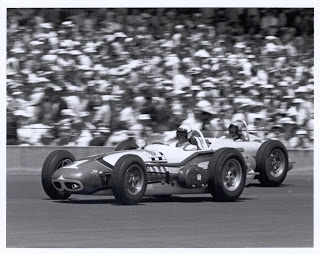 It's not the only site on the web, however, which means that anyone can spend hours - even weeks - surfing through different sites, pouring through clips on YouTube and stories from Google Archives, seeing hours bleed away from your life, hours that you'll never get back - but you likely won't care about that.*
*Such is the life of a cultural archaeologist - or an anal nerd.
For some reason, the 1964 500 has always carried a greater-than-others interest for me. Perhaps it's because it's the first 500 I can actually remember - sort of.  I'd just turned four, and my sole recollection of the event is seeing pictures from the race in the paper the next day.* And there were plenty of pictures, of perhaps the worst, and certainly one of the most graphic, crashes in the history of the 500.

*Back in those days, the race was still run on Memorial Day, unless it fell on a Sunday. In 1964 Memorial Day was Saturday, which meant the Sunday sports section was full of details.

At the end of the second lap, a car driven by rookie Indy driver Dave MacDonald spun coming off the fourth turn and crashed into the inner wall, exploding immediately. The flaming wreck then spun back across the track, clipping several cars and casting an enormous black cloud of smoke across the front stretch, before being hit by the car of longtime Indy favorite Eddie Sachs, which in turn also exploded. Sachs was killed more or less immediately (not from burns, as many thought at the time, but apparently from the sheer impact of the collision), while MacDonald died a couple of hours later, primarily from the fire's damage to his lungs.

Here's video of the crash - I'm linking to it rather than putting it right on the site because some of you might find it a bit graphic. The spectacular burst of flame and smoke came from the massive quantities of gasoline used by both cars - there were no limits to fuel capacity back then, and most cars used gas rather than methanol, which is used today. In addition, the magnesium used to construct the framework of many of the cars was highly flammable, contributing to the overall mess. The race was stopped for an hour and 45 minutes; the first time in Indy history that a race had been stopped because of a crash. A.J. Foyt won, driving a front-engine roadster - the last time a winner would do so. The next year Jim Clark would win in his F1 rear-engine Lotus, and after that nothing would be the same.

As far as I can tell, this is the only crash in Indy history to kill multiple drivers, and one of the last fatal accidents in the race itself (most fatalities since then have happened in practice.) It was the cap to a brutal week in motor sports; the legendary NASCAR driver Fireball Roberts had suffered horrific burns in an accident the week before, from which he would die in July.

In listening to the live radio broadcast of the race, one thing above all is apparent - that racing is dangerous, and that the drivers both know and accept the danger as the price of doing something they love. Implicit in that is a deep respect for the power of a race car, and the risk of being a racing driver. There's no doubt that racing has become safer in the years since; the last F1 driver to die was Senna over 20 years ago, and Earnhardt died at Daytona over 10 years ago.

And this safety is great, but I do wonder whether or not drivers still have the same respect for the sport they had in the past. Especially in NASCAR, the "Have at it" mentality holds firm, so much so that Judie refers to it as "Wrestling on Wheels." Pushing someone out of the way is commonplace, and while "wrecks" are common, major injuries are few and far between - it's the egos that seem to be more fragile.

Is this good? It reminds me of one of the unintended consequences of the mandatory helmet in hockey. Back when helmets were rare, players policed themselves, aware that a stray stick could do serious damage. That's not to say that stick fights weren't common; hockey was a brutal sport even then. But there was a measure of self-discipline to it, one that disappeared as helmets became more prevalent. Watch some footage from a recent game compared to one from 50 years ago and see how much lower the players carried their sticks back then.

The same goes for racing. Perhaps if the drivers remembered how dangerous racing was and is - how these cars are still guided missiles - we might see a little more discipline on the track. Our desire to make life safer and safer, to cut down on the risk involved, isn't limited to sports - as Harry Reasoner once said, no matter how much you try to eliminate risk in life you can't achieve immortality. But maybe, just maybe, if racing were a little more dangerous, a little less protected, the drivers themselves might be a little more responsible. The way it stands now, as commentator David Hobbs often says, one day it will surely end in tears. ◙
Email ThisBlogThis!Share to TwitterShare to FacebookShare to Pinterest
Labels: Auto Racing, IRL, NASCAR, Sports