Debating the debate, or "Yes, John King really was that bad"

by Mitchell Hadley
I suppose it says something about my hopeless situation as a political junkie that I chose to watch the Republican presidential debate over the sixth game of the Stanley Cup Final last night.* Yes, as much as I've liked to think that I've moved on since my days as a true political operative, it appears that politics is much like malaria - once it's in the bloodstream, it's very difficult to get rid of it.

*I watched the first debate in April as well, the one in South Carolina, but at least I had an excuse that time - we'd just gotten back from a trip to Greenville ourselves, so (we said) it would be fun to see how much of the city we could recognize in the shots Fox provided. Not having visited New Hampshire for almost twenty years, I have no such excuse for my behavior this time. 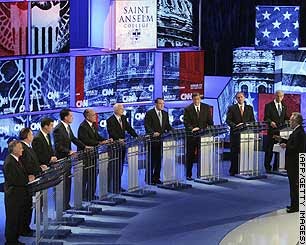 At any rate, the best way to watch this debate was in conjunction with the Twitter stream being provided by National Review. That way one could be reassured that John King really was as bad an emcee as it appeared, that the "This and That" segment was pure idiocy, and that Pawlenty did not look good when given the chance to attack Romney vis his "ObamneyCare" crack.

Michele Bachmann looked good, very good. I've taken some good-natured ribbing over the years for my support of her, dating back to when I was a candidate for the state legislature back in 1998 and was impressed with her then, but last night I thought she justified those years of support. I still think she can be a little strident at times, but I think her occasional lack of smoothness might be working to her advantage. I had to laugh at the "pundits" who wondered how she'd do in the unscripted format of a debate - as someone mentioned, her biggest gaffs have come when she's gone off script during prepared remarks. When she's working without a net, as she did last night, is when she's at her best.

Mitt Romney looks and sounds like a casting director's idea of a president, and that can be taken any number of ways. Is he my first choice? No. But he's not my last choice either. His line about how any of the seven on stage would do better than Obama - brilliant. But, to paraphrase William F. Buckley Jr., you might be able to say the same thing about the first 50 names you run across in the phone book.

There's a lot to like with Rick Santorum. I've been critical of him in the past, and that's what makes it difficult, but how many times do we run across this situation, where we run into someone we've already decided we're not going to like, but find ourselves agreeing with him in spite of ourselves? Too often, at least in my case, for it to be a surprise. I still have my doubts, and I don't think he's going to make it, but I like the cut of his jib.

Ah, Newt. As you know, I've been a booster of his since before the last election. And, to the extent that things haven't worked out as I've forseen, I think (with all due modesty) he would have been better off following my advice. But, as is his wont, he made a couple of brilliant observations last night, particularly on the inanity of the false "either-or" choice the media so often wants to foist on everyone. And in those moments, he reminds me of why I supported him in the first place. And why he can be so damn frustrating at the same time.

Herman Cain was a disappointment. Were the expectations for him too high after the first debate?  Same for Pawlenty - while I'm glad the debate wasn't turned into an internecine bloodbath, he really did flub that "confrontation" with Romney. Ron Paul was everything you expected - always interesting, frequently off the deep end, occasionally penetrating, with ideas that are deserving of consideration. Dismiss him if you will, but not what he says.

I would like to see Rick Perry get in, just to spice things up. I still want to hear from Jon Huntsman, to find out of the Democrat talk about him being "the candidate we fear most" is just a diabolical smokescreen. And I dearly hope Paul Ryan takes the plunge - if the Ryan plan is going to be the big issue in the campaign, who better to defend it than its creator?

But for the talk from the pessimists (and boy, aren't they tiresome?) who wring their hands in despair about the supposed weakness of this group of candidates, I still say that I could unhesitatingly support any one of them next year. If anything, that tells you how high the stakes have become.   ◙
Email ThisBlogThis!Share to TwitterShare to FacebookShare to Pinterest
Labels: Politics, The Election