Are they for real?

by Our Word
Guest post by Cathy of Alex 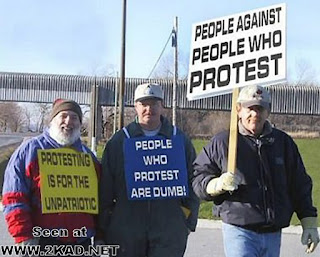 It's easy to make fun of the Occupy Wall Street and it's offshoot demonstrations in various cities - including one locally in Minneapolis, MN. I'm sure they are still laughing in downtown Tripoli too! Minnesota is usually, at least, a season behind the fashions and the music that are on the streets and on the radio (for those dinos that still listen to the radio) everywhere else in the U.S. so it makes sense while the Arabs had their Spring we are into Fall.

I hesitate to call the Occupy Wall Street a movement. It's not a movement, per se, in that it is not a cohesive and organized event positioning itself toward a common goal. It's almost like a "be-in" (remember those, you folks that are still listening to the RADIO!?) or Summer of Love or Woodstock or even an Andy Hardy film. Hey, kids, let's put on a show!? How about a bunch of us just show up someplace at a certain time and try and get something going, see what happens... It seems like a flash mob but the mob has no flash.

Occupy Wall Street, to me, is part of a current cultural phenomenon that is sweeping the globe. Really, it is - look around. Arab Spring, demonstrations in Rome, Greece, those periodic World Trade Organization dust-ups, the Tea Party, appear, on the surface, to have absolutely nothing in common. But, I think they do. They are all started by disaffected and disengaged youth. It's tempting to yell out: Get a job you hippies! or wonder why these kids appear to have so much free time on their hands that they can camp out in downtown New York for weeks. No kids? No families? Turn on, Tune in, Drop out?

I used to date this super-prog guy about 15 years ago (I was prog then but he made me look like a "Contract with America" supporter) who claimed that Generation Y was going to put the Baby Boomers to shame as far as protesting and radicalism goes. I thought he was full of crap (actually, not the reason we broke up). Now, I wonder if I should find him and apologize.

Except I think neither one of us saw a day when so many young people literally cannot get jobs, don't have a stable home life (if a home life at all), can't afford college, don't believe that they'll ever be able to own a home, are paying child support before they are out of high school, and perceive that education is meaningless as there isn't anything to prepare you for other than debt, unemployment and take-out.

What is different with some of today's youth-started protest phenomenon from those of 3 - 5 decades ago is the resulting demographic of the protesters is not just Gen Y and Millenials - a lot of older, employed people with families have joined in. Perhaps, relieving their protest days of yore, or, perhaps, we have finally seen a day when all generations have the same gripes.

I'm not saying I agree with this new youth-driven phenomenon; but I also acknowledge that I don't see the world as they do. I'm pretty well established. I had a stable home growing up. I have a life full of purpose with Christ. I have a job. I don't have trouble putting food on the table. But, I've also got over 2 decades of head start.

It's true that no two people in the Occupy Wall Street can identify the reason why the collective is protesting. They are not even sure what they are protesting. There are probably some people who don't even realize they are at a protest but it just seemed like a great place to get laid! There is no common platform. However, I just caution us as a society to refrain from thinking Occupy Wall Street is meaningless and nothing will come from it. Revolutions have started this way. We may not have to break out the guns, but new ideas can sometimes be as powerful and scary as any armament. ◙
Email ThisBlogThis!Share to TwitterShare to FacebookShare to Pinterest
Labels: Culture, OWS, Politics