by Bobby Chang
During the runup to an aborted election to determine if video poker would be stopped by the next July, a famous evangelical minister, Anthony Evans Snr, spoke to a large crowd about the issue after the video poker lobby (“pokies” to our Australian mates) had bought the preceding year’s gubernatorial election, eventually leading to expanded gambling in our state that has hurt it. Isaiah 65:11-12 warns those who forsake God and sets a table for luck, and furnishes an offering to it will be killed, as they ignored God in favour of luck. 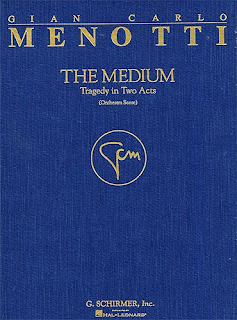 While we stopped the pokies and had them banned the next July (it was my only time I could celebrate winning that fall; I had just graduated from college in the middle of a terrifying losing streak and that fall was a winless year; it was so bad I contemplated taking the family’s Mercedes and dipping it into the pond near the home or entering it into a demolition derby, as everyone in town supported the rival and they cheered at my expense; my car couldn’t stand it and a head gasket blew out after the season), sadly, our state a year later (mostly because of a certain group that voted for it) sold out to the casino lobby with the state “LOOTtery,” and people have forsaken God in favour of luck, with luck being a virtue now in schools.

Now what does that have to do with opera?

Ah, it reminds me of a recent attendance of a twin-bill of Menotti operas, The Old Maid and the Thief and The Medium, with my discussion based on the latter that I attended, along with a plethora of old friends I’ve known (Mr. and Dr. LaRoche, Miss Heintzkill, Dr. Stallard, et al) from my Decade of Classical Music.

Looking at the number of media that appear on television in the past decade, with infomercials for the “psychic friends” organizations prominent during late-night television, and the popularity of New Age spirituality among Hollywood with ideas such as Harry Potter teaching a generation into the New Age, seeing old friends sing again (one posted me a message that she was emotional as it was her last with the university opera company), I thought about what I had seen in The Medium. Seeing Mme Flora (the medium) away, her daughter Monica and servant Toby are playing your typical children’s dress-up games and upon the return of Mme Flora, they haven’t prepared the home for the upcoming session with the Gobineaus and Mrs. Nolan.

The medium is supposed to “speak” to the deceased sixteen-year old daughter, after which Mrs. Nolan, infuriated at what she thinks is her girl but is Monica and Toby running an elaborate light and telephone scheme, tries to meet Monica, but is restrained by the other family in the psychic’s home, the Gobineaus, which then attempt to speak, using the medium, to their deceased daughter, but it is the laughing voice of the medium’s daughter too! The result was the psychic thinks the servant has pulled trucks, and refunds the two parents of the deceased. Still, the deceased’s parents think they truly spoke to their dead children. Thinking the servant, who was in the puppet theatre, was a spirit, she kills the servant.

What came to my attention was how gullible people are to “crossing over” with the deceased. The Gobineaus and Mrs. Nolan both believed they spoke to their dead children, when it was Monica and Toby’s games. They had been suckered, and Mme Flora was too, as she thought the servant she hired for the ruse was too a ghost.

The Gobineaus, Mrs. Nolan, and Mme Flora all had forsaken God in favour of finding cups to fortune. Two were lied and never believed it, and Mme Flora thought her own servant was a ghost to be killed. Regardless, the lesson I learned was never to trust psychics, and that Bible verse posted at the start of this column should be a warning why we cannot trust media such as those in the Menotti opera. ◙

This was from the practice session: