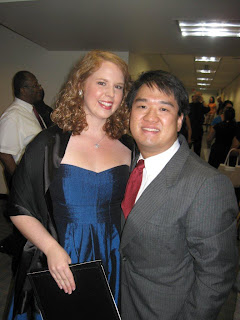 On an Opera Thursday column last year, we used her rendition of "Let the Bright Seraphim" from Händel's Samson at Governess Haley's to reference the opera aria. I've attended a few of her opera performances, and had the chance (Beethoven's Mass in C Major, 2010) to perform with her. I received wonderful news over the weekend that Ashley Briggs had won the South Carolina Regional Qualifier for the Metropolitan Opera National Council Auditions, and is advancing to the Southeast Regional in Winnipeg, Manitoba!

I've been honoured to have sung with her in Mass in C Major, and express my congratulations!