The book without a cover 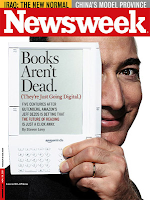 There's no doubt in my mind that whenever one moves forward, something gets left behind.  It doesn't mean that progress should be avoided; just that there will always be something that gets lost in the translation.  Such is the case with one of my new and favorite toys, the Kindle.

I got a Kindle Touch from the sainted missus for Christmas.  It was invaluable to me on my recent trip, when it helped kill two airport layovers - I mean, to have two books in something that's smaller and easier to handle than a magazine, well, who could ask for more?  It is as advertised - easy to use, easy to read, a space saver.  And for someone who's preparing to move in the next month, saving space is no mean feat.

And yet, nothing's perfect.  As we look through our library, going through the books that we're planning to replace when time and need (and budget) permits, there's a sense of sadness at losing the tangible.  One of the great pleasures for a book lover is to look at the libraries of other people, looking at the titles on the spines of their books, admiring the quality of the binding, getting an insight into the personality of the owner - their likes, dislikes, interests, passions.  Where does that go when the titles disappear inside a tablet?  We've already lost that with music, where the album gave way to the CD, and now the iPod.  Look at all those great scenes in 60s TV shows where the man, upon entering the woman's apartment, looks through her albums while she slips into something more comfortable.  One of them might even put a record on the turntable, setting the proper mood.  It just isn't the same with an iPod.

What of the autographed copy?  I'm still not sure about that, how one goes about getting an ebook personalized by the author.  A little thing perhaps, but it still removes a level of intimacy between the author and the reader.  And as someone who hopes to have a book published next year, I'll be curious to see how this plays out.


What about the hunt?  One of our favorite pasttimes is going into used bookstores, looking for the unknown, the out-of-print, the hidden treasure waiting to be discovered.  That doesn't go away for us, because most of those books won't be in e-versions, and one of the reasons we've invested in a Kindle is to free up space for those books that aren't available electronically.  But what about future generations - will they ever know reading as anything more than a means to an end, a purely functional pursuit?  (And this doesn't even begin to discuss the difference between a $1.00 bargain book find and the price of most ebooks.)

Holding a book, admiring the cover, the texture of the pages, the heft of the volume - these are aestetic pleasures, to be sure, almost sensual.  But it's part of the thrill of reading, the romance of the word.  Losing that will be a loss, of that there can be no question.  The books I've loaded on my Kindle are, so far, routine volumes.  They didn't replace books I already owned, and they didn't promise to have the pleasures I've discussed.  They are, for lack of a better word, utilitarian books.

There is an upside to all this, naturally.  In going through the library, we've been forced to make choices.  Some books have outlived their usefulness; they're not likely to be reread, or our tastes have changed sufficiently that they're no longer needed.  Having them on the bookshelf may be impressive looking, but as a practical matter they're just taking up space, and that's something we can't afford right now.  Other books will be replaced, but not right now; I always want to have access to Theodore White's Making of the President series, but I'm not planning to reread them at this exact moment.  It's quite likely that the public library will come back into play for us, although one of my quarrels with the library has always been that it rarely has the titles I'm looking for.  And we won't be getting rid of everything, or even most everything.  My guess is that the Kindle can replace one bookcase for now, with the promise of more in the future - but when you have seven full-size bookcases, as we do, there's no immediate danger that everything will go electronic.

The Kindle is a wonderful thing, and already I can't imagine being without mine - but, as is always the case with progress, a bit of the romance gets lost in the movement forward.  The human connection between printer and reader, between seller and buyer, between the owner of a library and the person looking at it. And once lost, it is likely lost forever.  ◙
Email ThisBlogThis!Share to TwitterShare to FacebookShare to Pinterest
Labels: Books, Progress, Technology