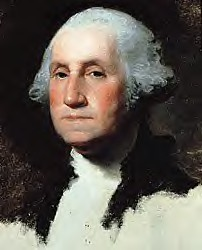 Today is the birthday of not only our greatest president, but the greatest American – George Washington. And that duel fact is why Washington, and not Lincoln or FDR or even Reagan, is the president that matters most to America nowadays.

It’s fashionable to talk of Lincoln as the greatest president, even when there’s not a big-screen movie about his life, and his name habitually tops the “greatest president ever” lists. But while Abraham Lincoln was unquestionably a man of towering strength who almost willed the Union to remain united, I’ve always had some trouble reconciling his presidency with the values of the Founders. Lincoln created a much larger, more powerful, more intrusive Federal government; he showed scant regard for freedom (of the press, of the accused, etc.), and his decision to compel the Southern states to remain in the Union at gunpoint is still, in my mind, problematic.

One could make the case that membership in the United States is a voluntary one, and that when the government of a state feels that they are no longer represented by the laws, values and will of the larger body, that government has the right (if not the obligation) to withdraw from that union. Lincoln’s conduct of the Civil War certainly puts that idea to rest for many people, although I don’t know that he established any kind of legal authority that definitively denies the right of secession.

However, my larger point here is to neither praise nor bury Lincoln, but to extoll the virtues of G. Washington. Here we have a man who attained great power and voluntarily relinquished it, not once but twice, earning the admiration of the world.

As general he successfully led the American army; he may not have been a military genius, but he executed a strategy that ultimately achieved its aim. (Think of him as a basketball coach who designed and implemented a gameplan that stymied the other team, didn’t allow them to play their own style, and ultimately frustrated them into making critical mistakes. “Winning ugly” is still winning.) He withstood miserable support from his own government, used his stature to quash a potential rebellion, and repeatedly declined suggestions that he use the post-war army to seize power.

As president he assumed an office that had been virtually created with him in mind,* and governed with no blueprint to follow, no precedent by which he could be guided. Everything he did created precedent, and he was acutely aware of this. He refused to impose his own political positions on legislation that, though he may have disagreed with, he nonetheless felt was legal and within the Constitutional province of Congress. He conducted himself with immense dignity and won the respect and love of his fellow countrymen. And, at the end of two terms of office, with no limit as to how many times he could be reelected, he once again voluntarily stepped down, preferring to return home to Virginia.

*In drawing up the job description the framers of the Constitution had no trouble granting presidential power to Washington, who could be trusted with it. Their worry was whether or not it could be trusted to those who followed him.

Like his aide and Treasury Secretary Hamilton, Washington was a Federalist. He recognized the weaknesses of the Articles of Confederation, and understood the need for a strong Federal government to hold the disparate pieces of the country together. He knew that as head of state he represented not only the American people but the American ideal; although he personally was never able to become a biological father, he viewed all Americans – not only those living, but those for decades and centuries to come – as his children, and he saw the United States as the legacy to be bequeathed to them. It was with this in mind that he served, as soldier, landowner, businessman, general, president and patriot.

Washington had confidence in America. He did not see the people as infants to be protected by an overweening Big Brother of a Federal government, but as stewards of a creation which he had helped to bring about. He was admired around the world and revered in his country (“First in war, first in peace, and first in the hearts of his countrymen”), which not only named its capital city after him (and many other cities as well, plus a state), but put his visage on the dollar bill, the quarter, the Purple Heart, the side of a mountain, and many other places. His monument in D.C. is not an enormous statue, a Greek temple, or a recitation of achievements, but a simple obelisk that soars toward the sky.

Some say that George Washington was the first American. I would add that he was not only the first, but the greatest. And the fact that a nation could not produce greater than its first is not a denigration of America, but a tribute to the greatness of that man – a greatness which, I fear, we shall never see the likes of again. ◙
Email ThisBlogThis!Share to TwitterShare to FacebookShare to Pinterest
Labels: America, George Washington