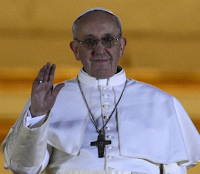 Of all that happened this afternoon, the one thing that didn't surprise me was that the new Pope chose the name "Francis."  It was, I think, completely predictable, given the command from Christ to St. Francis to rebuild His church.*  And, the Church being seen as something of a mess right now, it's a message that should be easily understood.

*Although we don't yet know for certain that he has chosen the name in honor of St. Francis of Assisi; numerous commentators have pointed out that it could be St. Francis Xavier.  At any rate, the symbolism was eminently understandable.

I don't know - well, anything - about the former Cardinal Bergoglio.  The conventional wisdom was that a quick conclave would produce one of the favorites; the stunned response from the massive crowd gathered in St. Peter's is evidence that this was not the case.  He certainly wasn't on my list of favorites.  But, as we all know, when man plans, God laughs.  I will admit to some initial apprehensions, but judging the wisdom of the cardinals is a little above my pay grade.

Unfortunately, however, not everyone sees it that way.  I mosied over to Rorate Coeli, one of the more traditional Catholic blogs in the blogroll, to see what the initial reaction would be.  And here, perhaps, is one more thing that doesn't surprise me: the reaction of the traditionalists, which is almost uniformly negative.

Here again, though, there's the unexpected.  I am taken aback by the viciousness, the vituperativeness  of some of the comments.  One writer suggested that since the new pope is 76, perhaps we won't have to wait long for a re-do.  In the same vein, another hoped that the pope would take after one of his predecessors - John Paul I, who reigned for only 33 days.   Someone said, "He looks tired.  Is it too early for him to resign?"  Many others took the opportunity to lace into Benedict once again for his renouncement of the papacy.  Almost all of them wrote in terms of gloom and doom, if not outright despair.  Frankly, after reading a few of these I felt almost nauseous.  It was as if I'd stumbled onto a Jack Chick website.   And, without even knowing the man, I felt great empathy for him. (And by the way, the surest way to drive him into the hands of the "enemy," whoever that might be, is to react in such a way.)

O ye of little faith.  We don't know what kind of pope Francis will be.  He may be a great pope, or a disaster.*  Cardinal Ratzinger, when once asked what kind of role the Holy Spirit plays in conclaves, said that it was unwise to assume that the cardinals always pick God's choice; what the Holy Spirit can be counted on is to protect the Church from utter disaster.

*John Paul II, you might recall, was thought to be a moderate when he was elected.  Of course, many in the traditionalist crowd think he's something of a modernist, but one only has to look at the relative state of the Church in 1978 to see the difference he made.  Plus, the liberals hated him - doesn't that count for anything?

Despair is a mortal sin, but I read plenty of it at this site.  These people call call themselves Catholics, but then you can call yourself anything you want.  So what are they going to do?  Leave for the SSPX?  Become Eastern Orthodox?  Fall out of communion with the Church?   Maybe they're thinking about leaving for another planet - it seems as if that might be their only choice.  As Peter said to Christ, "Lord, to whom shall we go?"

Someone who reads this blog might look back on this piece in a few years and say, "I told you so."  But I'm not hedging my bets as much as I am just willing to wait and see.  It could well be that in a few years, when the history of this pontificate is written, that we'll all be in agreement that the reign of Francis was a disaster for the Church.  It could be that we'll all acclaim him as the man who saved the Church.  It might be that we'll all be of many different minds, as it so often turns out to be.

There's much more that can, and will, be written about today.  I might even write some of it myself.  I do tend lean to pessimism, so naturally I'm going to admit to being a little disappointed that one of the (possibly) more orthodox cardinals wasn't elected.  But you know what?  I still trust in the Lord.  Christ, after all, said that the gates of Hell would not prevail against His Church.  I'm inclined to take Him at His word.  ◙
Email ThisBlogThis!Share to TwitterShare to FacebookShare to Pinterest
Labels: Catholic Church, Conclave