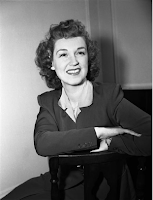 The first time I saw Risë Stevens was in the movie Going My Way, where she played a childhood friend of Bing Crosby who’d gone on to become an opera star. It was a flimsy storyline, a way to connect her character to a record producer who wound up buying one of Bing’s songs, thus bailing out his bankrupt parish, but it was charming. As was Risë Stevens – her charm fairly burst off the screen. It wasn’t until later that I really understood and appreciated her opera stardom, and that the Carmen she played in Going My Way was in reality the Carmen that won her the greatest fame of a long and successful career.

Risë Stevens, the woman with the funny first name (pronounced REEZ-uh), came from that middlebrow age that I so often talk about, both here and at the TV blog. She was a frequent guest on television, appearing on the variety shows of the day, not to mention shows such as the Bell Telephone Hour and Voice of Firestone – shows that featured classical music on a regular basis, meant for a highbrow audience but for the average television viewer. She appeared in but two movies, Going My Way and The Chocolate Soldier, and could have had a successful crossover career in Hollywood, but loved opera too much to give it up. It was said that she introduced a smoldering sex appeal to opera, and there’s no doubt she would have been a big success in today’s HD era of opera broadcasts.*

*In fact, her 1952 Carmen was broadcast to 30 movie theaters around the country, the Met’s first venture into what they called “television theater.”

She was an American, one of the first great American opera stars, and undoubtedly that helped make her more accessible to an American public, but there was something more – not just the sex appeal I mentioned earlier, nor the radiance of her screen presence, but that undefinable charisma that elevates one to a higher level. Whatever it was, she had it.

She retired from opera singing in 1961, not wanting to be remembered as someone who outstayed her talent, but she remained active in the business for years, teaching and nurturing young talent, hosting the Met’s centennial concert on PBS, never losing her connection to the craft that had given so much to her and to which she had given so much in return.

Risë Stevens was one of the last links to a great era, when classical music stars had popular crossover appeal, and she succeeded not only in the opera house but on television and film. She was one of America’s stars, a people’s star, and seeing her every Christmas in Going My Way was a way of hearkening back to that era, of making time stand still. With her death on Wednesday, at age 99 – well, if that era doesn’t come to a close completely, it comes ever that much closer. Her talent, and the pleasure it gave and continues to give – thankfully, that will live on. ◙
Email ThisBlogThis!Share to TwitterShare to FacebookShare to Pinterest
Labels: Classical Music, Obituaries, Opera