The ulterior motives of secular humanists 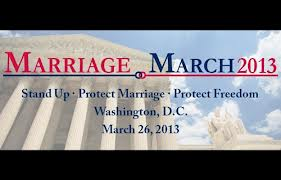 As the national March for Marriage comes this weekend, we must remind ourselves of the fight against a pro-sin movement calling themselves “for marriage equality”. The ulterior motive of the sexual deviancy activists with their “freedom to marry,” or “marriage equality” movement, which is to redefine marriage to mean “any two, regardless of sex,” continues the postmodern liberal humanist agenda to end Freedom of Religion by continuously eroding the rights of the church to help those in need, and to give control exclusively to the government of more situations the church had participated.

In states where marriage has been redefined or a dangerous “civil union” has been developed, churches have been banned from offering adoption, foster care, or any number of services that only the government or government-approved secular agencies can offer, mainly in order to indoctrinate them into the liberal teachings, or to allow a child to have two parents of the same gender, an attempt to force-feed them into the postmodern humanist agenda.

If this is forced down on other states, as endorsed by Dear Leader, churches will be converted into toothless social clubs where the Bible cannot be taught with sound doctrine and theology under threats of Shepard-Byrd and the government has barred them from running soup kitchens, foster care, or adoption agencies because of their refusal to comply with the humanist agenda, the “military” will ban chaplains, and freedom of religion will be replaced by the wants of a few sexual deviant activists where their coercion is mandated. We've seen most of it in states where it has happened. It's another way to expand government by eliminating churches' God-given plan to help those in need, and to replace it with government authority because the church refuses to comply with an edict to normalise sin.

Much to the thought of a pop tune (yes, this was before the LaRoche Era), “The newest rage is to reason it out, just meditate and you can overcome any doubt, After all, man is a god and God is no longer alive,” that is the mentality of today's humanists that want to use the homosexual agenda to drive the church off the public square. (1) Man versus God is now the battle, and a generation infused with false teachings is trying to turn the tide against churches. They want the courts to establish humanism as the state religion, and any religion that preaches the Bible will become a crime.