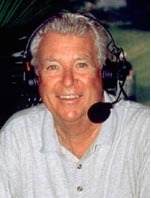 I first heard of Ken Venturi when I was ten or so. It was in Phil Pepe’s book Winners Never Quit, one of those books that I’d buy at the scholastic book sales they had when we were kids. Pepe’s book told the stories of athletes who’d come back from extraordinary adversity of one kind or another to become champions, and one of those chapters was on Ken Venturi.

Venturi had been a hotshot golfer with an ego to match. He’d finished second in the Masters as an amateur, had won early and often on the tour as a pro, and lived the life of the celebrity. Then, almost overnight, his game went south, that sweet swing turned into a mess, his mechanics crumbled. Soon he was reduced to begging for spots in tournaments. Even the Masters forgot about him. But because Venturi had ruffled so many feathers along the way with his cockiness, few people felt sorry for him, and even fewer believed he’d ever make it back. But he did, and the story of how the new, humbler Venturi overcame exhaustion and heat stroke to win the 1964 U.S. Open at Congressional is one of the great chapters in golf’s long history.

His rebirth was short-lived; carpel tunnel syndrome in both wrists devastated him, making it almost impossible for him to even feel the club in his hands. Without that touch, his game again faltered. Surgeries and endless practice brought him back, to the point that Pepe’s chapter ends with Venturi winning the 1966 Lucky Invitational in San Francisco, his final tournament victory.

Venturi retired from the tour the next year, and then began the remarkable next stage of his life, one that would surely have qualified for an entirely new chapter in Pepe’s book. As a child he had stuttered so severely that doctors told his mother he’d never be able to pronounce his own name; he’d overcome that, just as he would overcome the challenges that threatened his golfing career, and now Venturi would turn to broadcasting, where the next 35 years he would be the lead golf analyst for CBS.

I loved listening to Venturi cover golf, and over the years he became one of my favorite broadcasters. He might not have been as smooth as some, might not have had the way others had with words, but – like so many other broadcasters I’ve eulogized over the years, including his good friend and colleague Pat Summerall – Venturi was a big-match announcer. When you heard his hushed voice as Nicklaus stood over a put, you knew this was a big moment.

And like them, Venturi didn’t make the broadcast about himself. He told it like it was, but without the smarmy snark of a Johnny Miller or the harshness of a Curtis Strange. He wasn’t interested in showing the viewers that he was smarter and cleverer than the golfers on the course. And, perhaps most important, he was always on the golfer’s side. He didn’t want to see them fail out there, and took no delight when misfortune befell them. I remember during Jean van de Velde’s meltdown at the 1999 British Open that ABC’s team of Mike Tirico and Strange almost seemed to relish what was happening. Venturi wasn’t like that – he knew the pain of losing, and though he’d tell you what went wrong out there, he never suggested that he would have been above making that same mistake.

Venturi’s work with Vin Scully, Summerall, and Jim Nantz made CBS’s golf coverage the best on TV. When he retired a few years ago, to be replaced first by Lanny Wadkins and then by Nick Faldo, it just wasn’t the same. Don’t misunderstand me – I think Faldo can be very good, but he’s not Venturi.

When I’d heard a couple of weeks ago that Venturi was too ill to attend his (richly deserved) induction into the golf Hall of Fame, I worried that this might be the challenge he wouldn’t be able to overcome. His death on Friday, at age 82, leaves a void in both the sporting and broadcasting worlds. Ken Venturi was a class act, on the course and behind the microphone. He was a winner. ◙

Originally posted at It's About TV!
Email ThisBlogThis!Share to TwitterShare to FacebookShare to Pinterest
Labels: Broadcasting, Obituaries, Sports, Television