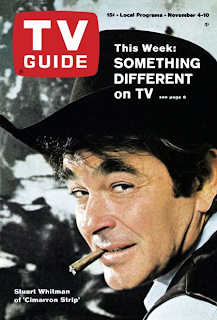 Back in the day – “the day” in this case being before DVDs, before VHS, before even TCM – there were only two ways to catch classic movies. One was to see them in a revival or art house theater, the other came courtesy of The Late Late Show on local TV.

My personal guide to the classic movie was the Academy Awards program listing that appeared each year in TV Guide. As a studious lad in college, I’d spend the last half-hour or so of each day in the periodicals stacks of the library, going through bound issues of TV Guide from the past dozen or so years, developing the pop culture interests that have stayed with me to this day. The Oscar Close-Up would feature pictures of the nominees for Best Actor and Best Actress, plus a list of the nominees in Picture, Supporting Actor and Actress, Director, and Song, and as a top-line guide to movies, it wasn’t bad. I’d make mental lists of the movies I hadn’t heard of, less well-known movies that struck me as interesting or at least intriguing, and I’d keep an eye out for them when they ran on local TV. I saw a lot of good movies that way – This Sporting Life (with nominees Richard Harris and Rachel Roberts), Séance on a Wet Afternoon (Kim Stanley), Tom Jones (the movie, not the singer – Best Picture of 1963), Becket (Richard Burton and Peter O’Toole), among others. Many of them were not what I expected at all, which increased my personal pleasure.

One of those little-known movies was a British film called The Mark, a bleak story of a man trying to rebuild his life after being released from prison for child molestation. It starred Stuart Whitman, an B-actor better known for television, who’d somehow copped a nomination for Best Actor. He didn't win – Maximilian Schell did, for Judgment at Nuremberg*), but The Mark was an obscure movie that was well worth watching.

Stuart Whitman’s on the cover of TV Guide this week for what is probably his best-known role: Marshal Jim Crown in Cimarron Strip, CBS’ 90-minute answer to the mega-Westerns Wagon Train and The Virginian. Actually, Cimarron Strip bears more resemblance to another CBS oater, Gunsmoke – no surprise, since the series is helmed by that show’s former executive producer, Philip Leacock. Whitman hopes Cimarron Strip will be the start of a new stage in his career, which to date has consisted mostly of roles that had originally been intended for others: Darby’s Rangers (Charlton Heston), The Story of Ruth (Stephen Boyd), The Sound and the Fury (Robert Wagner), An American Dream (David Janssen). Even The Mark was inherited from Richard Burton, and despite the nomination, Whitman concedes, “I wasn’t sure I was in the right profession.” He feels that this role “is definitely going to hit me with an image. It’s the image that makes the star. I’m on the brink of the stardom that I’ve always sought and wanted. I wasn’t ready for it before.”

Read the rest of this week's article here.
◙
Email ThisBlogThis!Share to TwitterShare to FacebookShare to Pinterest
Labels: Television, This Week in TV Guide