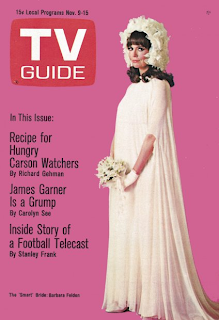 Last week we dabbled in food, sharing a TV Guide recipe for minestrone. This week we go even farther, as Richard Gehman tells us how "You too can be a chef" by watching The Tonight Show with Johnny Carson. You see, Carson makes a perfect companion for the hungry view (and Gehman finds himself, for some unknown reason, starved every time he watches Carson).  Forthwith, Gehman's complete late-night supper, made during a recent episode of Tonight.

Start with the small potatoes, which can be prepared for boiling during Carson's commercial for a new spot remover.  You can do the whole thing from your easy chair while Don Rickles comes on and insults everyone in sight.  As Rickles continues, it's time for you to separate slices of chipped beef, which you've brought to your easy chair along with the spuds.  As Ed McMahon shills for Alpo, take the separated beef to the kitchen, toss the potatoes in a pot for boiling, and while you're there put an eighth of a pound of butter in a frypan which has been preheated to 300°.  Turn up the TV while Sergio Franchi is singing, so you can hear him while toasting two slices of bread and opening a can of peas.  With the next commercial, you can drain the potatoes and toast a couple more slices of bread.  The next guest, possibly George Jessel, allows you to chop a fresh green or red pepper.

When the show pauses for a station break, that's your chance to add two tablespoonfuls of sifted flour to the sizzling butter, stir with a whisk, and add a half teaspoonful of salt, a couple of pinches of dried parsley, a very small dash of oregano and some pepper, preferably fresh-ground.  You can add a half-cup of water while the next singer (probably named Connie) warbles away.  Add the chipped beef to the mixture when shills for a sewer-cleaning device, along with a half-cup of milk, stirring until the mixture bubbles, at which time you include the drained peas.

This whole thing should take you to within about ten minutes of the end of Carson's show.  During the next-to-last commercial, add a tablespoonful of capped black pitted olives, and as Carson interviews his final guest (Mary Martin Mary McCarthy, Mary Healy, or maybe Mary Queen of Scots), you can serve your creamed chipped beef, either on the toast or the potatoes you've put on the side.  Turn off the set.  Eat heartily.

I don't know.  I don't think I can eat that heavy a meal right before bedtime.

Read the rest of the article here.  ◙
Email ThisBlogThis!Share to TwitterShare to FacebookShare to Pinterest
Labels: Retro TV Monday, This Week in TV Guide