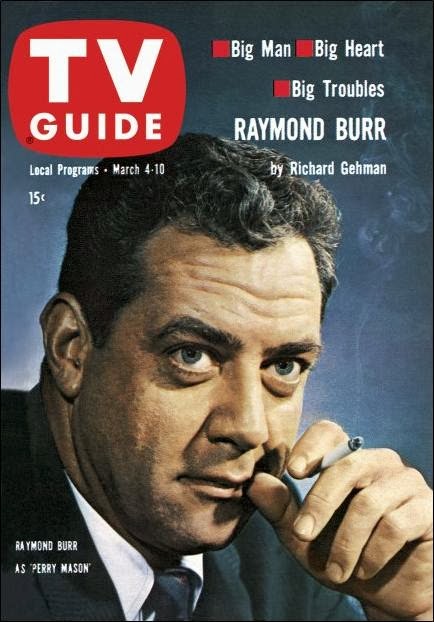 Raymond Burr was on the cover of TV Guide at least a dozen times, between Perry Mason and Ironside, not to mention his turn as Pope John XXIII.  There's very little new to be written about him, and we know that much of what we've already read will turn out not to be true.  There are a couple of things that remain consistent through all these stories, however: that Ray Burr is a very private man, and that he's a mensch to work with.

Richard Gehman's profile of Burr this week alludes to his life as "one long series of heartbreaking tragedies," most of which didn't actually happen, but there's a significant line in this section, in which Gehman remarks that "few of Burr's friends know anything about him."  It's likely that, in retrospect, what they did know of him might not have been so.  Lest you think I'm hammering Burr, I'm not, or at least I don't mean to.  It is, however, impossible to write about him without picking up these small pieces, which appear in so many articles about him, and contrast them with what we've since learned about him.

Raymond Burr is one of my favorite actors, just as Perry Mason remains one of my favorite series.  And the comments from Burr's colleagues on Mason demonstrate why he was so well-liked on the set.  He's a practical joker, for one thing, his favorite victim being Barbara Hale, who plays Mason's devoted secretary Della Street.  He's good to the crew, with "a desire for everybody to be happy, to be wanted and to belong," leading one person to refer to the Mason set as "the happiest company in Hollywood."

He's also loyal, and not afraid to fight for what he believes in.  When William Talman, who plays Mason's nemesis Hamilton Burger, was suspended from the show following a morals charge (later dismissed), Burr was outraged and fought CBS constantly until Talman was reinstated.  And Ray Collins, who plays Lt. Arthur Tragg, remained listed on the opening credits even after his health prevented him from appearing on the show.  This was, of course, also at Burr's "request."

This article is the first of a three-part series on Burr's life; subsequent parts will go into detail on the more dubious assertions about Burr's past.  In later years, articles will elaborate on these events, but they'll also discuss Burr's devotion to visiting American troops in battle areas, and his continuing commitment to his colleagues. A mensch indeed.