What the Church needs is not guys, but men 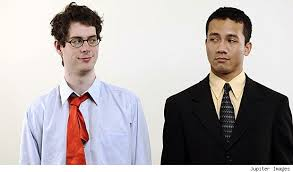 Ideas often come from strange places.  I was reading an article from The New Yorker, to which I was steered by Uni-Watch, on the clothing choices made by the U.S. World Cup team’s coach, Jurgen Klinsmann.  (By the way, I’m not impressed, with either him or his clothing, but that’s for another day.)  The New Yorker in turn directed me to an article by Wesley Morris at Grantland, writing about the sartorial disaster that is the NFL coach.

Nowhere do any of these articles reference either the Church or religion, but I’m going there nonetheless, because that’s where it’s pointing me.

The changes in men’s attitudes toward clothes in the last two decades are evident in [Rex] Ryan, [Andy] Reid, Mike Tomlin, the Harbaugh brothers, Sean Payton (God rest his season), and most men paid to pace sidelines: Athleticwear promotes the impression of a blue-collar masculinity of looseness and relaxation. These clothes foster the sense that American males are more comfortable with being guys than being men. In the way some grown women refer to themselves as girls and have become culturally indistinct from their daughters, so, too, have modern fathers become culturally indistinguishable with their sons.


And there we have it.

The Church is, and always has been, involved in spiritual battle.  Battles are fought and won, not by guys, but by men.  Yet walk into any Church for a Sunday Mass, and unless you’re in a very special venue (such as my old parish, St. Agnes in St. Paul), you’re apt to see, relaxing in the pews with their wives and children, a bunch of guys.  The better dressed ones wear sportshirts and khakis, but too many of them show up in jeans and even shorts, and their kids are often dressed in t-shirts with some kind of nonsense or other written on the front.  (Note to self: don’t start in on how some of the women dress, as if they were skanks in training.)

Now I know what some of you are thinking:  Isn’t it enough that they’re actually in Church?  Does God really care how they’re dressed?  And to the extent that God looks at designer labels, I doubt whether He has a preference for Nike over adidas or Reebok.  As an expression of interior spirituality, however, I think God very much does care what we wear.

(Full disclosure: most of the time I wear a suit and tie to Mass.  Occasionally it will be a sport coat and slacks with a tie.  If I'm feeling particularly rebellious, I might throw in a pocket hanky.  When it’s really, really hot and the church lacks air conditioning, I might wear a conservative polo and slacks.  Rarely have I worn jeans to Mass, and I’ve never felt good about it afterwards.)

There used to be a phrase, “Sunday best,” that implied you wore your best possible clothing to church on Sunday.  It didn’t have to be a suit; in fact, if you were a farmer, a working man, a man just scraping by with enough to support his family, you might not even own a suit.  It meant that you took pride in what you wore; it told others and, more importantly, yourself, something about who you were.  Sadly, “Sunday best” has fallen into the graveyard of generational egalitarianism, part of the rebellion against our parents and their old-fashioned ways.  As Morris notes,

Until the late second half of the 20th century, no great confidence was needed to put on those clothes, particularly in the 1950s and 1960s. If you were a man, that’s more or less what you wore. At the end of the ’60s, great political upheaval and conflict pitted one generation against the children it produced. For a long time, no child wanted to resemble a parent. Men stopped dressing like [Tom] Landry and Vince Lombardi partially because that meant dressing like their fathers.


Morris’ point that “That  generational dovetailing risks ceding the aura of authority. Clothes can no longer be relied upon to tell us who runs the show “ is well-taken.  So many modern men today dress like they’re still teens, act like they’re still teens, and in many cases are teens, at least emotionally.  While it’s true that Audie Murphy won the Medal of Honor for heroism when he was 19, I’d suggest that the future of the Church depends on its men growing up and acting like men, instead of guys.

With the unifying ubiquity of Internet culture and without the random obligation of a war draft or roiling, sweeping sociopolitical movements to put generations at odds, children who disdained their parents for reasons of politics and who were bound up in social concerns produced generations wary of their parents for reasons of vanity. They placed a premium on maintaining an air of adolescence. They didn’t want to resemble their parents even once they were parents. They wanted to resemble their children. A suit doesn’t make you look young, per se. Gym clothes do.

We might be more comfortable with that generational rejection, with that subsequent embrace of youth and the illusion of egalitarianism it fosters. But when no one wants to look like the grown-up, what’s chipped away at is a crucial air of respect.


As I say, you have to remember that Morris is talking about sports (and culture in general), because so much of what he says is relevant to my point.  Being young – and we’ve all been there – leads to, among other things, a disproportionate amount of confidence in one’s ability to know everything, combined with a lack of real-world experience and more than a dollop of emotion.  When one looks at how so many men behave nowadays, it’s not difficult to surmise that they’ve never evolved from their younger years.  Wisdom rather than impulsiveness, reason instead of emotion, thought as opposed to feelings – those are the trademarks of adulthood, in our case manhood.  And if today’s male chooses to express himself outwardly as a guy instead of a man, what else can we surmise when it comes to crunch time?

Morris concludes that “If a coach sets the tone for a team, the clothes are a barometer of leadership. Would a coach in a suit be more successful than one in a dingy-looking hoodie? Is that a distinction that would amount to anything during a game? Should a football coach really be dressed like the world’s soccer coaches, like a businessman at a late dinner? I don’t know. He just shouldn’t be dressed like a slob. “

And so I repeat the words I wrote as the title of this piece: what the Church needs is not guys, but men.  You can worship the Lord just as well in a suit, Bermuda shorts, prison dungarees, or nothing at all.  The question is whether or not you’re willing to fight for Him, because that’s what the Church needs today.  C.S. Lewis famously wrote that “We make men without chests and expect from them virtue and enterprise. We laugh at honor and are shocked to find traitors in our midst.”  Clothes do make the man, or at least the guy, and in the absence of reading a man’s interior heart and soul, we can never know for sure – we’re simply left with the impression cast by the part of his outward appearance that is under his control, and that includes the kind of clothing that covers his chest.

In short: if Church is important to you, dress like it.  If you aspire to be a leader within a fellowship of followers, dress like it.  If you’re not afraid to face a world increasingly hostile to your beliefs, dress like it.  And it doesn’t mean you have to run to Brooks Brothers and spend a small fortune – just dress as if you cared, even a little.  Don’t treat Church like a high-school picnic, because the truth is we're in for a very bumpy ride.
Email ThisBlogThis!Share to TwitterShare to FacebookShare to Pinterest
Labels: Culture, Religion