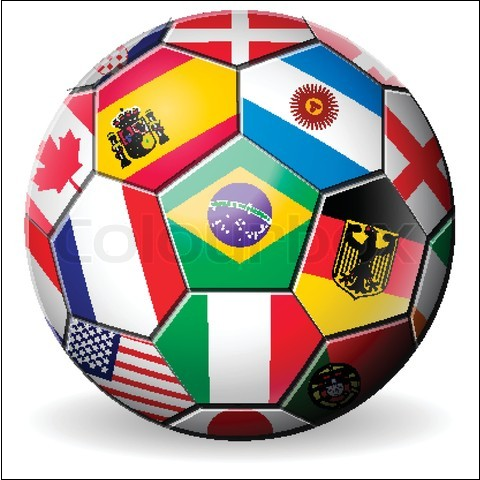 I'm a political conservative.  I’m also a soccer fan.  If you’ve read this blog for any length of time, neither of these will come to you as revelations from on high.  But there seems to be this idea, from both liberals and conservatives, from soccer fans and non-soccer fans, that you can’t be both.  Allow me to put this idea to rest.  And if neither soccer nor politics interests you (and I can’t say I’d blame you for feeling that way), feel free to come back in a few days.  Or go to It’s About TV, which generally has far more interesting stuff anyway.   For the one or two of you who remain, here goes.

Bernard Goldberg, whom I mostly agree with and always respect, describes soccer as the “anti-American pastime,” and favorably quotes Ann Coulter’s recent ridiculous column, in which she says, “Any growing interest in soccer can only be a sign of the nation’s moral decay.”  Now, these kinds of pronouncements aren’t new, and some of the worst offenders are the sport’s own fans.  Fans like the liberal columnist Peter Beinart who told CNN’s Fareed Zakaria that that soccer “reflects a more cosmopolitan temperament, more of a recognition that America has things to learn from the rest of the world.”

To the liberal elite, soccer proves “the superiority of the young over the old, of liberals over conservatives.”  As Beinart says, younger Americans – who are more disposed to like soccer than older Americans – are also “far less likely than older Americans to say that American culture is superior or to say that America is the greatest country in the world.”  And when one looks at the growth in popularity of the sport, “the states where soccer is most popular, they’re overwhelmingly blue states and the states where soccer is least popular are red states.”

Now, that’s really the way to win fans and influence people, isn’t it?  You know how I’m always going on about how you have to make your argument in such a way that you won’t make people disagree with you just because they don’t like you?  Well, this is about as bad an advertisement for soccer as I can find.  Anyone who’d get into a sport as imperfect as soccer, just because of imagined ideological reasons, really does need to have his head examined.  Maybe he took too many headers in his youth soccer league.

I don’t appreciate it that Google’s little doodles pay more attention to the World Cup than they do commemorations such as D-Day and Memorial Day.  I don’t like the fans who use the lingo of the sport to shut out non-fans (although you really should use the term “nil” rather than “zero”), and I mostly laugh at teams that try to copy European naming conventions, such as Real Salt Lake and FC Dallas.  Note to Dallas ownership: why would you use the term “FC” (an abbreviation for “Football Club”) when your own league is called MLS – with the “S” standing for “Soccer”?  In the United States, soccer isn't football - we already have a game with that name.  Let’s face it, there are a lot of pretentious tropes to be found among soccer fans.

But none of it is enough to make me any less of a fan myself.

The thing about discussions like this is that when you start refuting someone else’s opinion (well-formed or not), you always run the risk of going down the rabbit hole, of trashing other sports in defense of soccer, of resorting to ad hominem attacks.   Goldberg says that most soccer fans “wouldn’t know a fumble from a first down, a hit-and-run from a double play,” but go wild when the Americans tie Tunisia zero-zero, “or nil-nil, as they call it.”  This is a funny line, but it’s just not true, at least in my case, and I suspect for many others as well.  I don’t quite go back as far as Tinker to Evers to Chance, but I’ve seen a few double plays in my lifetime.  I’ve got an entire bookcase in my library devoted to baseball, football, basketball and hockey – the four food groups, if you will, of sports.  I don’t think I’ve got a single book on soccer; I know at the very least that I have more on Formula 1 racing than the World Cup.

As a matter of fact, if name-calling were all that was needed, I could say that “if you think soccer is boring, have you tried watching baseball lately?”  Now, you’ll note that just last week I wrote a piece that ripped on baseball for many things, including being boring.  And yet I was a baseball fan for a long time, and I still enjoy watching classic players and games.  Just because you like soccer doesn’t mean you have to hate baseball, or vice versa.  It’s a big sports world out there.  I’ve lost interest in many sports over my lifetime – baseball, pro football, basketball – but none of them had as a root cause a dislike of America or American culture.

Here’s what I like about soccer – the clock doesn’t stop, the game isn’t interrupted by commercials, the players are exceptionally skilled athletes, the crowds sing and really gets into the game, the announcers are among the best in the world.*  Unless hating commercials is somehow a betrayal of the capitalist system, I fail to see how any of these preferences are bad.

*Except for Gus Johnson.

Come to think about it, there are some things about soccer that conservatives should not just like, but love.  Take relegation, for example.  In most countries (excluding the United States and perhaps a couple others), the bottom three teams at the end of the season are relegated to a minor league, Being relegated means a considerable loss of income and visibility, not to mention increased difficulty in attracting top talent.  Such a system puts a premium on performance – if you finish in last place, you don’t get the top pick in the draft – you get booted out of the league altogether, and have to win your way back.  For a conservative that values achievement-based reward, what could be better than that?

Look, I’m not blind to soccer’s faults.  Yes, there’s not enough scoring – too many teams play not to lose, rather than to win, and soccer’s extremely complicated offsite rule could be tweaked to give the offense a bit more of an advantage.  So what – hockey’s gone through a considerable scoring drought for a couple of decades.*  Yes, the players take dives and act like divas, rolling around at the slightest hint of physical contact as if they’d been shot.  Some of them even take a bite out of their opponents – but even there, American sports did it first, and better.

*Although I’ll allow as to how the threat of a fight does keep the interest level up for a lot of fans.

And I take second to no one in decrying the corruption of soccer’s top governing board, FIFA.  The awarding of the 2022 World Cup to Qatar reeks of bribes, backroom deals, and misdeeds of one kind or another.  (Kind of like politics, now that I think of it.)  The U.S. federation has made its share of questionable decisions over the years as well.  But is any more corrupt than the NCAA’s governance over college athletics?   Even giving the NCAA the benefit of the doubt, I doubt you’d want to be in a darkened room with either group.

I don’t care if soccer is the “world’s sport.”  All that means to me is that I have more leagues to choose from, more styles to compare, more games to catch.  It doesn’t matter if it’s cheaper for kids to take up, or less hazardous to their health.  And for all the times that soccer players flop when someone breathes on them (kind of like basketball players, now that I think of it), I still marvel at their abilities, their stamina, the way they can manipulate the ball with both head and feet for at least 90 minutes in every game.

It doesn’t mean I’m anti-American, nor does it mean that I’ve become a political liberal.  What it does mean is that I’m exercising my God-given right to choose what sports I follow.  What could be more American than that?