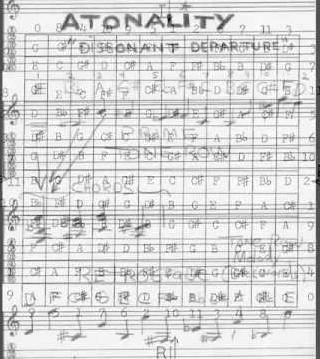 A couple of weeks ago, Joe Queenan (full disclosure: one of my favorite writers) published a very funny, very nasty piece in The Guardian in which he attacked modern classical music. (I particularly liked one of his lines in which he describes concert-goes who "have learned to stay awake and applaud politely at compositions by Christopher Rouse and Tan Dun. But they do this only because these works tend to be short and not terribly atonal; because they know this is the last time in their lives they'll have to listen to them."  On the other hand, I'll admit six years after the fact that I actually rather liked Satyagraha.)

Needless to say, Queenan's piece has caused something of a stir among classical music blogs. It's quite possible, dim bulbs that some of them are, that they didn't realize Queenan's role as a resident cultural curmudgeon. But the debate has been nothing if not spirited. Terry Teachout, while taking Queenan to task on his total dismissal of modern music, agrees that "I don't go in for crunch-and-thump music, nor do I care for the over-and-over-and-over-again minimalism of John Adams and Philip Glass, which puts me to sleep." (I agree with a lot of what Teachout says about the modern music he likes.) Teachout's friend Ethan Iverson, who champions "frequently fiercely dissonant and somewhat tuneless" music, disagrees, as Teachout attests. (By the way, there's some terrific writing going on from these bloggers, so don't think that the links I've chosen here are anything more than the tip of the iceberg in this discussion. And check out the writers they link to as well - you might not agree with them, as I didn't, but you'll be informed about the discussion by reading them.)

I suppose the way you feel about classical music in general will dictate your answer to this question. If you feel that it's a window to God's creation, for example, you probably tend to side more with Jay Nordlinger, who wrote that

Music critics and other such types like to say that what the public really wants is modern music — Cage, Birtwistle, Stockhausen. None of this Classical Top 40 stuff. But this is wishful thinking, of course. If you give 'em Tchaikovsky, Beethoven, and "Finlandia" — not to mention "Carmen" or "William Tell" — boy, do they come.


As is often the case, I gotta go with Jay on this. (Even though there's plenty more good stuff out there than the "top 40" that you hear on classical radio nowadays - hey program directors, you ever heard of "deep cuts"?) Yes, there are twentieth-century composers that I'm very fond of - Britten, Stravinsky, Copeland, Rorem, Barber, Menotti, even Ligetti and Webern. Now, there are a lot of critics who would complain that this music isn't "modern" enough for them (except perhaps for the last two). But, as we've written many times at this site, there is an undeniable relationship between truth and beauty, particularly the natural beauty in the tones that mirror the rhythms of the human body. (And we touched on modern music as well, as this link to our four-part roundable from last year on "Art and Politics" will attest - though since this initial writing I've come around on several pieces, including Nixon in China, which I now agree is one of the seminal 20th Century American operas.)

And so we are left with this question to ponder: is there, in fact, a relationship between the harshness of modern music and the harshness of our modern culture? For we have become a harsh people, in our words, our opinions, our very way of life. Some call it edgy, but others might suggest it's merely nasty. Is that a good thing? Is our culture really better off now than it was fifty years ago?