by Bobby Chang
This past weekend was the seventeenth anniversary of gospel music singer and songwriter Rich Mullins' death.  The 41-year old pop singer and his 24-year old protégé, Mitch McVicker, were in a Jeep, driving to Kansas when Mr. Mullins lost control of the short-wheelbase, high centre-of-gravity truck, overturning it.  Both were tossed, with Mr. Mullins hit by a tractor-trailer in the immediate impact of the crash.  Mr. McVicker survived, but admits to injuries that he still suffers today, now at 41 himself, mainly double vision.  Neither was wearing a seat belt.

Sadly, it took Mr. Mullins' death to win his awards, Artist of the Year in 1998 and Song of the Year a year later, in what some called a sympathy vote for the popular songwriter from Kansas, and devoted to St. Francis of Assisi, including a reference to it in his music publishing (he had signed with the independent Reunion label (now part of Sony) from 1982, but had just defected to Word (now part of Warner Music Group) shortly before his death, and had masterworks of his next album already in development;  the rough drafts became known as the first disc of The Jesus Record;  friends finished the songs for commercial production).

With the 45th Gospel Music Association Dove Awards coming next month, the 15th anniversary of the duo's popular win (in March 1999, before the GMA moved the awards show to October in 2012), there was one cruel irony of winning Song of the Year 18 months after his death.  Considering neither was wearing a seat belt, this screenshot from the original GMA Dove Awards broadcast could show the irony as Mr. Mullins (represented by his brother David) and Mr. McVicker were named winners.  And the irony was even crazier considering the last time the very same presenter pairing had presented at the very awards show seven years previously, they gave Sandi Patty her 11th consecutive Female Vocalist of the Year (she never won again).  Later that year, something happened to the male presenter -- and he never did it again.  This time, the cruel irony of the award was because of the way the singer died, and the awards presenter.  Think about it.  Can you see the cruel irony of the Rich Mullins Dove Awards win in this photo? 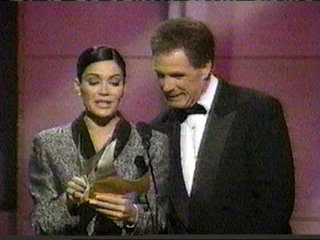