The sad state of sports 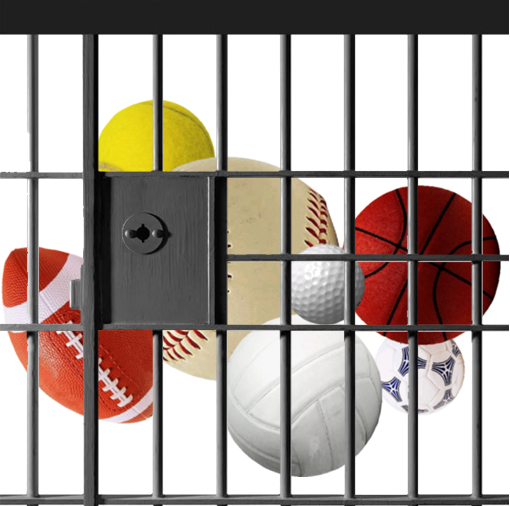 At one point Friday evening, the top ten headlines at Fox Sports included the following: a football player indicted for child abuse, the NFL players union approving a new drug test program, an NBA general manager dealing with charges of racism, a baseball player suspended for drug use, data showing 28% of NFL players will suffer some type of dementia, another football player dealing with domestic abuse, an Olympic athlete convicted of homicide, and a racing driver taking the place of another one killed in an accidental accident.  And this didn't include the calls for the NFL commissioner to resign, and the stories leading up to that. 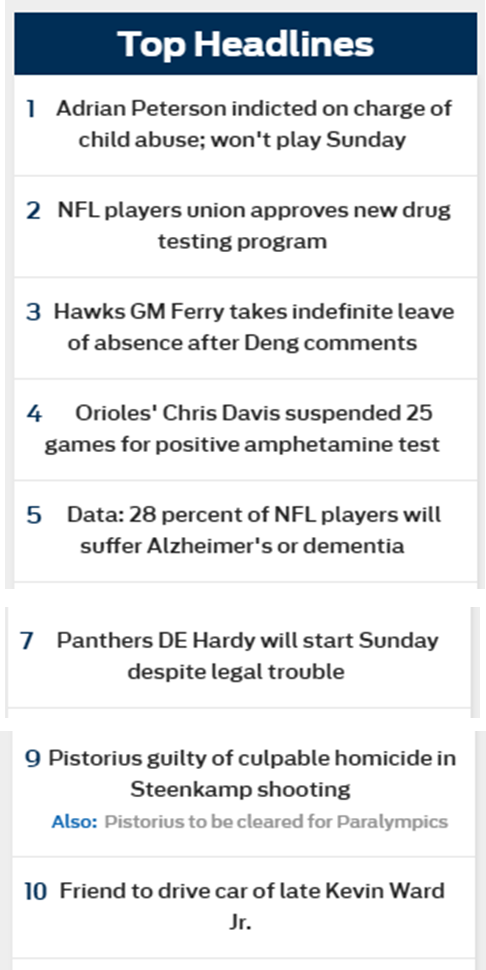 As you can see, it's a pretty grim legacy.  Truth be told, last week was not the best week if you're in the sports PR business, although it certainly provided you with job security.  And they say sports is supposed to provide us with a break from real life.

Of course, those who participate in sports - players, managers, owners, fans - are simply one subset of society as a whole, complete with the same foibles and graces that you might find in any group of individuals that share a particular trait.  In that sense, we shouldn't expect to see sports headlines that are any different than those we read about in the news.  As well, the media love to focus on "stories," usually negative ones.  All that being the case, it was still an extraordinary sports week, and a depressing one.  And to the extent that sports does mirror the rest of society, it tells us much about the world in which we live.

But then, we have other headlines to deal with: dissension in the Church, terrorism and genocide in the Middle East, non-stop partisan bickering on Capitol Hill, a president who doesn't seem to know which end is up, a nation seemingly at war with itself.  .  It can make the world of sports seem tranquil by comparison.  I'm fond of often writing the phrase "my point is," but I'm not sure there's a point to all this.  Those who say the world is going to hell in a handbasket have a lot of ammunition behind that argument right now.

There are still good stories in sports, just as there are good people.  (And good headlines in the news, though they may be even fewer and farther between.)  And the drama of a live sporting event is still difficult to surpass, which is one reason why so many of us keep coming back for more, even while knowing who we're dealing with.

There will be a time, though, when each of us has to ask of ourselves whether or not it's worth it, or if we're simply the idle Romans being entertained by the circus in the Colosseum - the gladiators, the Christians being fed to the lions - while the empire crumbles around us.  I reached that point a few years ago when I quit watching the NFL* and NBA, and I don't doubt that other sports are standing in line waiting their turn (and not too patiently, it seems).

*Baseball, on the other hand, besides being corrupt, is also boring.

The thought of this sickens me, as it should everyone who used to enjoy the simplicity and competition of sports.  So much of it is about money nowadays, which I think has no little impact on everything else going on.  But so much of it is like the horse that's already out of the barn - there's not much anyone can do over it, and if we fuss too much, we're dismissed as curmudgeons.

And until that time comes for each of us, when we have to decide what's important for us, we'll sit back and watch: watch the games, watch the headlines, and wait for the next shoe - or body - to drop.