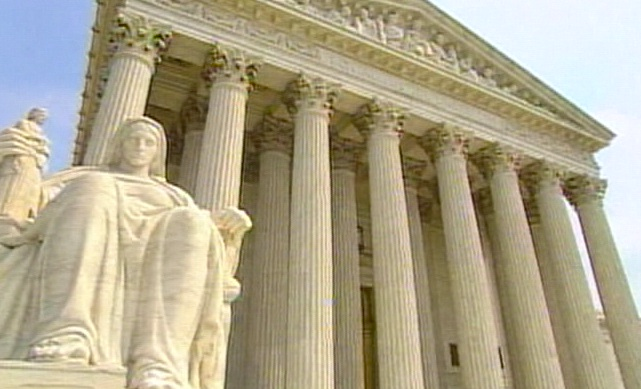 When the United States Supreme Court overturned Constitutions declaring marriage as One Man and One Woman to force five states into the evil agenda of the humanists, the Founding Fathers could be easily angered by the actions of these rogues that, in 11 years, have imposed their ideology on half of the nation (and potentially more) through their whim.

In our fourth grade history books, we had to quote most of the Preamble to the Declaration of Independence.  One specific section holds true with these cases.

"But when a long train of abuses and usurpations, pursuing invariably the same object, evinces a design to reduce them under absolute despotism, it is their right, it is their duty, to throw off such government, and to provide new guards for their future security."

These activist judges overturning Constitutions have effectively become a tyrant.  When the Massachusetts Supreme Judicial Court ordered marriage redefined in 2003, other states struck back and imposed a check on these rogue judges.  Now, the judges are overturning the checks placed on these judges, effectively making them tyrants.  These actions are reminiscent of six grievances listed by the Founding Fathers in the Declaration of Independence:

(2) Judges dependent on the leader's will. (See court packing to advance the agenda.)

(4) Trial for pretended offenses (see hate crimes or supporting the Bible, not the state).

(5) Abolishing the free system of laws to make it an arbitrary government (in most cases, same-sex "marriage" is a byproduct of judicial mandates, or large cities using abuses that were developed by courts in Reynolds v. Sims to overturn the Great Compromise;  furthermore, when abolishing the Constitution to develop something they want themselves, that was abuse the Founding Fathers warned against).

(6) Taking away the charters, abolishing valuable laws, and altering fundamentally the forms of our governments (see the courts overturning Constitutions; the check on the judges has been overturned by the judges themselves -- our checks and balances system was designed to protect against rogue judges, so they strike back).

Ponder these points from our Founding Fathers when you consider the rogue activism today.
Email ThisBlogThis!Share to TwitterShare to FacebookShare to Pinterest
Labels: Courts, Homosexual Marriage, Religious Freedom