The glory and the burden of democracy 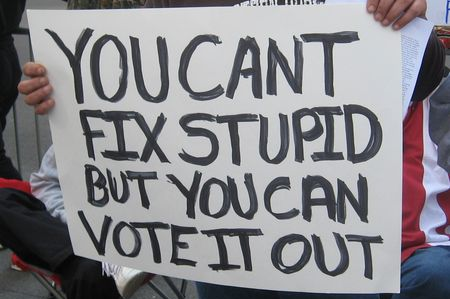 William F. Buckley Jr. once famously said that he'd rather be governed by names selected at random from the phone book than by the faculty of Harvard.  To the faculty, he could have added former professional wrestlers:

Ventura spoke Tuesday evening on “The Alan Colmes Show,” blasting public support for Kyle in the wake of the blockbuster hit American Sniper and accusing the decorated sniper of being a tool of a war-mongering United States in Iraq.

“But are you comparing what the Nazi mission was versus what our mission is in war as a country?” Colmes asked. “Are we analogous to the Nazis?”


This really goes beyond being embarrassed to be from Minnesota; it's almost bad enough that you're embarrassed to be an American, or a member of the human race for that matter.  That a fool like this could have been elected dog catcher, let alone governor of a sovereign state, speaks to the shortcomings of democracy.  For as stupid, as offensive, as loathsome as Ventura is - and in all cases that is considerable - we have to remember that he didn't get there alone.

One recalls the great Simpsons episode where Montgomery Burns launches an unsuccessful campaign for governor.  Referring to the voters afterward, he says, "Look at them, Smithers.  This anonymous clan of slack-jawed troglodytes has cost me the election, and yet if I were to have them killed, I would be the one to go to jail. That's democracy for you."  I prefer to remember my own words when I lost my race for the state legislator: "The people have spoken, the bastards."

The glory of democracy, at least in the abstract, is that the people rule.  That is also its burden.
Email ThisBlogThis!Share to TwitterShare to FacebookShare to Pinterest
Labels: Politics, Stupidity