Throwback Thursday: It's tough being President

by Mitchell Hadley
Obama’s Approval of Public Continues to Drop 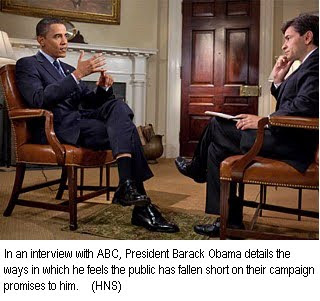 (WASHINGTON, D.C. – April 1) In an exclusive interview today with ABC’s Good Morning America, U.S. President Barack Obama said he does not approve of the job the American public is doing.

“These are difficult times for us all,” Obama told correspondent George Stephanopoulos during the interview, “and we all have to do our part. I’m doing my share, but I don’t see you people out there pitching in.”

Obama told Stephanopoulos that he gave the public an overall 57% - 43% disapproval rating, the first time during Obama’s presidency that the approval rating had fallen that low. “I give them high marks for having elected me to office,” he said, but added that “people can only live off past glories for so long. Many of the same voters who basked in my spotlight on Election Night are now failing to deliver on their campaign promises to me.”

The President singled out voters in Massachusetts, New Jersey and Virginia for particular disappointment. “You were with me in 2008,” he said, “helping Keep Hope Alive. But where is that hope now? You elect Republicans like Christie and Brown, and expect me to understand that? This is not the public that I came here to lead. How can a politician respect a voting public that says one thing and does another?”

Other areas in which the public failed to measure up include tax policy, deficit spending and healthcare reform. “The landmark affordable healthcare legislation, for example, is a historic moment in our nation. It’s the first time [Congress] passed something I can say I am really proud of. The fact that so many people are upset about it shows a definite lack of understanding on their part. We should expect more from our voting public than what we’re getting.”

Obama warned there could be dire consequences for the public if their approval rating continues to drop. “Immigration reform is just around the corner,” he said sternly, pointing a finger at the camera. “If you folks are not careful, I’ll just replace you with a different group of voters who understand what our mood here in Washington is.”

The news was not all bad for the public in this latest poll. “I know that it’s only a small number of people who are responsible for this overall low rating,” Obama said, “but it only takes a few influential voices to spoil it for all voters. Now, if you show more responsiveness to my legislative agenda, then I’ll be willing to give you the benefit of the doubt. For now.”

Asked if there was one thing he would say to the voters if he could talk to them face-to-face, Obama paused for a moment before answering. “I have already pledged several times that I would not rest until the health care plan was passed, the economy improved, unemployment reduced, and our troops home. You try doing all that with a demanding wife and two daughters on your back all the time, not to mention a mother-in-law living under your roof. Give me a break, people. I need that rest.”