Nihilism and the AME church shootings 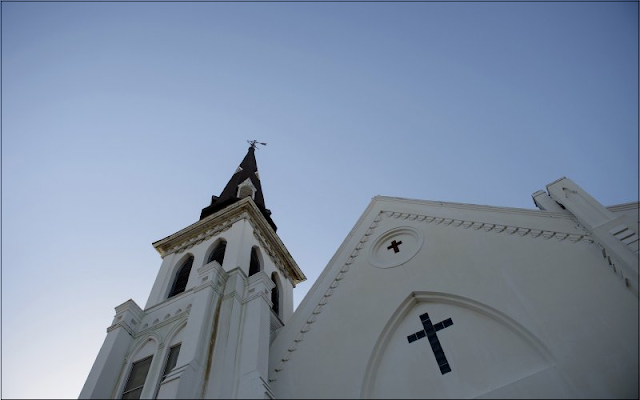 The Mother Emanuel African Methodist Episcopal church (AME, NOT an Anglican church!) in downtown Charleston was devastated by a shooting where a South Carolina state legislator who is the minister at the church was among nine people killed in a shooting in the middle of a prayer meeting.

The blame game, as you might expect, has sadly begun.  Emile DeFilice, a farmer who runs a popular farmers market and is a former Commissioner of Agriculture candidate, placed the blame on the Cross of St. Andrew flag that the Confederacy used in war, probably based on the suspect's race, posting on the farmers' market page to take down the Battle Flag -- all on the basis the shooter was of one race and the church was of another.  He was followed hours later by one of the Left's top agitators.  The President, as part of his propaganda to push for an elimination of guns, decided to advance his mantra of eliminating the Second Amendment the way he has been working the First Amendment to death.  Another state legislator blamed the shooting on Fox News Channel, a popular

Unfortunately, this is not about race or weapons.  This instead is regarding the worldview of the shooter, considering the recent history of younger shooters involved in mass murders, most of whom are nihilists.  Nietzsche's nihilism, advanced by humanist teachings in school that have a 1960's "God is Dead" attitude, a lack of respect for anyone except themselves.  We've seen that with postmortem comments by those who knew the assailants in many incidents.  As John Carr in Orthodoxy Today wrote in the wake of the Aurora, CO theatre shootings, "Let us consider the facts that are forgotten in this restricted conversation: we have killed off all of our cultural heroes, accenting the flaws of those who have gone before us instead of emphasizing their strengths and virtues and the ideals toward which they strove; we have questioned into extinction the traditional understanding that some truths, particularly in the moral sphere, are absolute and absolutely binding upon all of us; and we have exalted everything that is base, barbaric, evil and insane, expecting that somehow our culture will continue to thrive on this noxious, unwholesome food." (Carr)

Touchstone magaine in 2000 had this to say after the Harris and Klebold shooting in an article, "The Children of Columbine."  The assailant was five at the time of the incident.

The evidence is clear in all of the research:  A hatred of God and a hatred of the sanctity of human life that the Left have designated over the years has much to do with the crisis in youth today.  Both helped develop another monster attack where this time, a church was hit.  Our Summer Chorus is singing Mendelssohn's "Hear My Prayer" next week, and I am thoroughly enjoying the practice sessions.  Enjoy this as we remember those who died in a senseless attack that has the evidence of the godless coming fast, and the wicked oppressing us.

Hear my prayer, O God, incline Thine ear!
Thyself from my petition do not hide.
Take heed to me! Hear how in prayer I mourn to Thee,
Without Thee all is dark, I have no guide.
The enemy shouteth, the godless come fast!
Iniquity, hatred, upon me they cast!
The wicked oppress me, Ah where shall I fly?
Perplexed and bewildered, O God, hear my cry!
My heart is sorely pained within my breast,
my soul with deathly terror is oppressed,
trembling and fearfulness upon me fall,
with horror overwhelmed, Lord, hear me call!

O for the wings, for the wings of a dove!
Far away, far away would I rove!
In the wilderness build me a nest,
and remain there for ever at rest.