The FIFA scandal: deja vu all over again 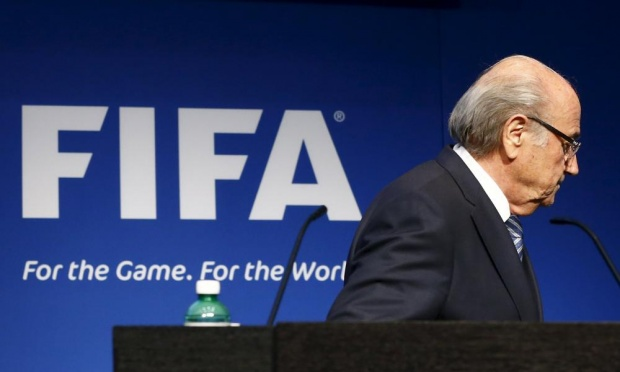 In considering the ongoing FIFA scandal, one can be forgiven for feeling they'd seen this all before, maybe on an episode of The Untouchables, where the incorruptible Eliot Ness helps bring down the mob, although Sepp Blatter makes for a most charmless Al Capone.  Or it could have been the evening news, with Blatter cast as an Eastern bloc strongman brought down by the people's revolution after the fall of the Berlin Wall; you can almost see his statue being pulled off its pedestal, an outstretched arm breaking off and shattering as the statue comes crashing down.  Whatever the analogy, it all seems awfully familiar.  I mean, the level of corruption makes you think of a college sports scandal.

Which is why I have trouble believing FIFA will be able to stall the election of a new president until the end of the year; once the people have it in mind to revolt, liberalized policies are usually a case of too little, too late. As the tumult grows, with confirmations that Blatter is the focus of an FBI probe that includes charges of bribery in the awarding of World Cup tournaments dating back to 2010, the calls for reform can only grow louder.  If Blatter should be indicted this summer or early fall, with the United States demanding his extradition (and perhaps calling for him to be held without bond as a flight risk), it would make it very difficult for him to continue running his empire from the county jail.

It's certainly possible that FIFA is an organization that defies reform, where the corruption runs so deep a divining rod wouldn't be able to uncover it all.  If that's the case, the only possible solution would be to blow it up and start all over, to let the United Nations take care of selling the game to developing countries (put it under UNICEF; after all, soccer's good for kids, isn't it?), while a new organization could be formed to manage the basics of the game: the rules, the governance of international competitions, and most of all the administration of the World Cup and the granting of media and advertising contracts.*  It's true that this last point is what led to most of the bribery in the first place, but without the ability to dispense patronage to smaller countries under the guise of "growing the game," it would be that much harder for anyone to build up the likes of the power base Blatter had.

Whatever the case, it is true that sports hasn't seen anything like this since the heyday of boxing, when the International Boxing Club spread its octopus-like tentacles throughout the sport and the mob controlled everything and everyone.  Because make no mistake about it: FIFA is modern-day organized crime, a group of corrupt officials running the world's most popular sport as if they were cheap hoods in expensive double-breasted suits, smoking Cuban cigars while sitting around a table that looks suspiciously like a map of the world.

This has been an extraordinary couple of weeks for people who've followed the story.  With the sordid headlines dominating newspapers and cable news networks like the latest political scandal (at least nobody's thought to call it FIFA-gate.  Yet.), soccer hasn't gotten this kind of attention in the United States since the last World Cup.  In fact, I'm not sure it's ever had this kind of exposure.  And for every new story that breaks, every new charge that comes complete with the opening theme to The FBI accompanied by images of Efrem Zimbalist Jr. waiting to pounce on another crooked vice president in charge of graft, the remaining officials of soccer's governing bodies are left to hope in the truth of P.T. Barnum's old saying that there is no such thing as bad publicity.
Email ThisBlogThis!Share to TwitterShare to FacebookShare to Pinterest
Labels: Corruption, Soccer, World Politics