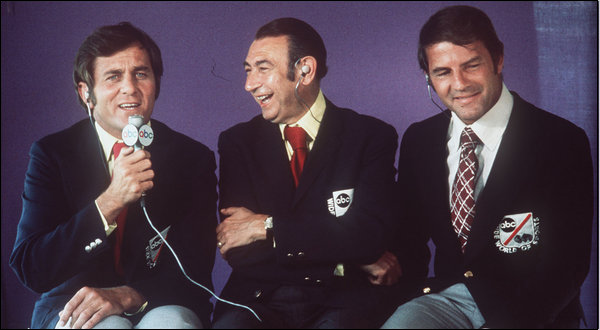 The thing about Frank Gifford was this: although he was a certifiable part of NFL history - before, during and after it had become America's sport - and had been a broadcaster for, it seems, forever; and though he was sometimes the butt end of jokes about how he wasn't always spot on with his game callas as an announcer, and he'd perhaps overstayed his time on Monday Night Football, and his wife was way younger than he was; despite all this, it didn't seem, at least to me, that he was old enough to die, to be a mere mortal.  It just didn't seem  possible.

Frank Gifford was one of the first football players I ever read about.  It was in one of my first "grown-up" books, from the NFL's "Punt, Pass and Kick Liberary" - what we'd today call Young Adult books.  They were real\-life adventures of famous football stars, unforgettable games, strange-but-true moments.  The first of these books that I read was, appropriately enough, entitled Heroes of the NFL, and along with tales of Elroy Hirsch, Eddie LeBaron and the like, there was a chapter on Frank Gifford.

Gifford's one was a compelling story, and remains so.  He'd been a star at the University of Southern California and then joined the New York Giants, perhaps the most glamorous professional football team of them all.  There, he had helped to revolutionize the game by utilizing his multidimensional skills (he could pass, catch, run and play defense) to popularize the option pass, in which he'd take a handoff, roll out to the left or right, and then loft a pass to a waiting receiver.  It helped him win the MVP in 1956, when the Giants beat the Chicago Bears to win the NFL championship.

And then came 1960, and Chuck Bednarik.  It was one of the reasons Gifford appeared in the book, and one of the reasons his story was compelling to me.  Late in the game, with the Giants trailing Bednarik's Philadelphia Eagles but on the move, Bednarik laid out Gifford with a hit that was one of the most memorable in the history of the game, forcing a fumble that the Eagles recovered, giving them the win and a major leg-up en route to winning their last NFL title.


It also knocked Gifford out cold.  Stone cold.  More than one Giant said they thought Bednarik had killed Gifford.  Bednarik celebrated the victory, not realizing the seriousness of Gifford's injury.  The end result was a massive concussion, forcing Gifford to miss the remainder of that season as well as the entire 1961 campaign.  In the interim he went into television, took up broadcasting.  Many thought he'd retired.  His decision to come back for the 1962 season as a receiver was a major story.  He played three more successful seasons before retiring for good in 1964.  He went into the Hall of Fame in 1977.

That was what put Frank Gifford in Heroes of the NFL, and if that was all there was to it, it would have been quite a life.  But in a way, the rest of the story had just begun.

He was a commentator on NFL games for CBS until 1971, when he became the play-by-play man (one of the first former players to do play-by-play rather than color) on ABC's Monday Night Football, along with Don Meredith and Howard Cosell.  The trio became one of the most famous broadcasting partnerships of all time, turning the broadcast into an event, and making MNF into something of a travelling zoo, "coming to your town next week!"  Gifford was cast as the straight man, the only sane one in a chaotic booth with Dandy Don and The Mouth, struggling to focus on the game while anarchy surrounded him.  While many preferred his predecessor in the role, Keith Jackson (on the way to a storied career of his own), and he was often knocked for getting calls wrong, it was probably a wonder, in that environment, that he got anything right at all.

Gifford did other sports besides football; one of his most famous calls was Franz Klammer's gold-medal winning downhill run in the 1976 Winter Olympics, and he was also there to cover Evel Knievel's triumphs and tragedies as a motorcycle jumper.  He was on Monday Night Football until 1997, when he was more-or-less eased out.  He was married three times, the last of which was to Kathie Lee.  He was entrapped by an airline stewardess who had been paid big bucks by a tabloid to catch Gifford in incriminating positions.  As I said, what a life.

If you hadn't grown up with Frank Gifford in his various phases of stardom (he had just retired, in fact, the year I first remember watching football), he might have felt to you like one of those celebrities who appear in "dead or alive" spots on morning radio shows.  And yet, as I wrote at the outset, he ever quite stopped being one of the golden boys you thought would live forever.  So it was something of a surprise to hear of his death last Sunday at the age of 84, and when the obituaries started retelling the facts and figures and you realized what a great career he'd had, and then thought back on the longevity of his announcing career, you found yourself a little more surprised, reflecting on those things you'd known about but had forgotten, or downplayed.

Frank Gifford was never my favorite announcer, but he had something of that "big game" sound that I've written about so often.  His voice was a warm and familiar presence that reminded viewers that you were watching an event.  I thought back on that, last Sunday, and reckoned that, indeed, Frank Gifford was one of the heroes of the NFL, and always will be.


Cross-posted to It's About TV!
Email ThisBlogThis!Share to TwitterShare to FacebookShare to Pinterest
Labels: Frank Gifford, Obituaries, Sports, Television