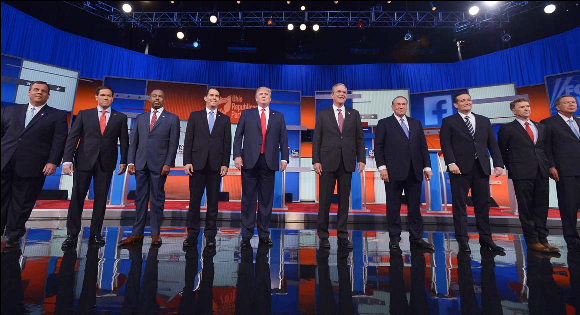 The title was inspired by a television show once hosted by the late WCIV weekend reporter who later worked for Fox, Steve Byrnes, who died of cancer in April. #ByrnesStrong

Football is Back - And Fox Adopts Promotion and Relegation for the Presidential Candidates. It's only fitting that with football starting this week, the ads for the Barclays Premier League on the Comcast stations (and other leagues on Al Jazeera, plus Bundesliga on FS1/FS2/FSP), that Fox has split a fuller than full field of Republican contenders for these "glorified press conferences," as the late original host of Fox News Sundaycalled them in an early episode of the show, into football-style divisions for Thursday's press conferences. With apologies to Fox's new rights for the Bundesliga, they are split this way:

Of course, if this was Comcast, I'd have used Premier League and Championship!

Baby Slaughter. The outrage over the selling of murdered children's body parts by "Planned Parenthood," the biggest baby murder mill in the country, is everywhere except for mainstream media, which has become a source of propaganda for left-wing causes. The arrogance of the organisation and even the legislators and Administration in full support of them is now in full colour to see. Why do we fund them, and the Administration probably bullies companies to give to them or lose contracts. Meanwhile, the outrage over the killing of a lion has more exposure than the killing of babies. Why?

Of course, as we should expect the next few weeks, television shows will be scripted to favour Planned Parenthood as planning begins for the binge watching generation who watches all ten episodes of a "season" in one setting on the streaming services. How lazy can you be?

Victory Laps. The sexual perversion crowd, fresh off the illegally officiated left-wing overturning of constitutions nationwide, is now creating a worldview apartheid where the Bible will become criminal as we see in Kentucky and other places. But isn't this an extension of the ban of the Great Compromise at the state level, as Scalia notes New York City's bias in the Supreme Court?

And Speaking of Premium Television. Richard Hammond, Jeremy Clarkson, and James May have joined the premium pay, watch all ten in one revolution. Fresh off their firing from OFCOM-regulated The Beeb, where standards matter, they have signed with Amazon to do a show on their streaming service, likely a watch ten in one show, so they tape all ten shows, then people watch them when they want. Time is not an essence, and content can be as raunchy as they go. What is next?
Email ThisBlogThis!Share to TwitterShare to FacebookShare to Pinterest
Labels: Politics, Random Thoughts, Sports, Television