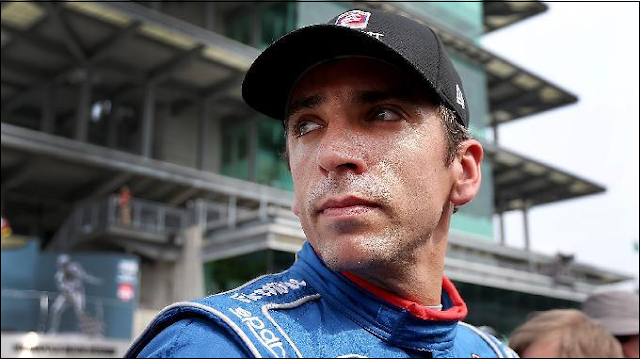 I was intending to comment on a fun 1970's themed promotion that fits within our television blog that NBC has been airing for an event next week, but sadly, I have to postpone that commentary.  As I write this at 2120 hours Eastern time on a Monday night, a message has been sent by the Indianapolis Motor Speedway with a press conference by Mark Miles of INDYCAR.  The news conference was requested by Julianna Wilson and her family to be held in Indianapolis, and it was the worst news that could happen following Sunday's ABC Supply 500 at the Igdalsky family's Pocono Raceway.

Mr. Miles announced just after 2100 hours EDT tonight INDYCAR driver Justin Wilson died of his head injuries after his helmet was struck by an errant nose cone from Sage Karam's car that had impacted the Turn 1 wall at Pocono Raceway on Lap 180.

The freak incident that has many, including NBC's Townsend Bell, asking is it time for canopy cockpits, similar to an Unlimited Hydroplane or a Top Fuel racer.   James Hinchliffe was knocked out for a time after the 2014 Indianapolis road course race, and as we know, Felipe Massa had an injury when a spring on another race car penetrated into his visor during the Magyar Nagydij in 2008.    With the tragic circumstances at Pocono, the questions regarding canopies in single-seaters will come up again.  John Surtees (F1 world champion 50 years ago) lost his son Henry to a crash a few years ago when an object struck his helmet in an FIA F2 race.

Mike Joy:  "Incredibly sad . . . within a fortnight racing loses both of our 'gentle giants.'"

A. J. Allmendinger:  "My friend, brother, teammate, and especially to one of the most amazing people I have had the pleasure to be around."  (Allmendinger has posted a Wilson photo on his Twitter profile.)

Sage Karam (whose crash led to the debris that led to the fatal crash):  "I can't find the proper words to describe the pain and sympathy I feel for Justin and his family."

The humility in the paddock tonight is poignant in light of the news.  To the Wilson family:

Eternal rest grant unto them, O Lord; and let perpetual light shine upon them. May they rest in peace. Amen.
Email ThisBlogThis!Share to TwitterShare to FacebookShare to Pinterest
Labels: Auto Racing, Obituaries, Sports