Opera Wednesday: The sacredness of life 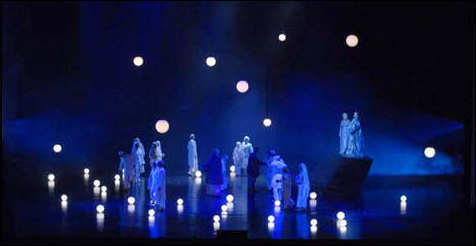 There are a few operas that, in an oblique way, make reference to contemporary issues even though they were written decades, or centuries, ago.  One such example is Die Frau ohne Schatten (The Woman without a Shadow), the magnificent 1919 opera written by Richard Strauss, with a libretto by Hugo von Hofmannsthal.  The crux of the story centers around an Emperor and Empress who are unable to conceive; this is symbolized by the fact that she is without a shadow. The King of the Spirit World decrees that unless she gains a shadow before the end of the twelfth moon, "she will be reclaimed by her father and the Emperor will turn to stone."

As the story progresses, a scheme unfolds to obtain the shadow by stealing it from a peasant woman, thus depriving this woman of motherhood.  The peasant woman is urged to "sell her expectations of motherhood, dissolve her marriage [to a husband who desires children] and pursue a life of individual self-fulfillment."  As this article indicates, the notes accompanying productions of this opera generally relate the moral of the story as being "one person's happiness cannot be bought at the price of another's," yet it is clear that a major component of the story - and its moral - concerns the ability of a woman to conceive, the glories of motherhood, and the existence of the souls of unborn children

[Spoiler alert!] The opera concludes happily, odd enough for an opera; the Empress decides to reject the stolen shadow ("I will not rob humanity from someone else"), the peasant woman's shadow is returned to her, and for her act of generosity, the Empress too receives a shadow.  Both couples  - the Emperor and Empress and the peasant couple - sing of their joy and humanity, and praise their unborn children.  On occasion, the chorus assumes the guise of unborn children, making the analogy even stronger.

Ten or so years ago, the Los Angeles Times, one of the worst newspapers in the United States, committed a hilarious error by changing a review of the opera, which the critic had described as "an incomparably glorious and goofy pro-life paean," replacing the term "pro-life" with "anti-abortion." One hardly knows where to begin with this comedy of errors; the mindless policy in the paper's style sheet, which apparently dictates that all references to pro-life should be changed to emphasize the negative; the blatant inaccuracy of the edit, since the abortion message in Frau is inferred when transposed to today's times and there is in fact no discussion whatsoever of abortion in the libretto; or the idea that being pro-life should be assumed to refer to abortion only and exclusively. You can read more about it here.  Idiots.

The point is, Die Frau ohne Schatten does not deal with abortion directly; it deals with the sacredness of human life and the importance of being open to its creation.  And while it is not an anti-abortion screed, as some might think, is explains one of the fundamental reasons why the sacredness of human life is important and why, among other reasons, abortion is wrong.

Anyway, enough with the politics.  Regardless of what you think, there is glorious music in this opera, which in the video below is provided by the famed Sir. Georg Solti and the Vienna Philharmonic.  You can get other videos that include subtitles, through which the power of the story becomes even more apparent, but you won't find many guided by better than Solti.