The finest moment from the Pope's trip to America 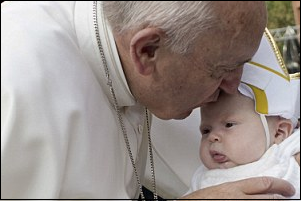 I don't deny that I've had my share of bones to pick with Pope Francis over the years, but I found this clip from his recent trip to America absolutely charming.  I'd meant to get to it earlier than now, but as someone once said, better now than later.  If you look closely, you can see the Pope bent backwards with genuine laughter - but then, who among us wouldn't be taken with a cute baby dressed up to look like you?


As I've said, I've been critical in the past, but this is not the time for that. I'll just note something that I've said before, which is that if I were lying critically ill in a hospital, I could do far worse that to have him sitting at my bedside comforting me. It has nothing to do with ideology or theology or the governance of the Church, but everything to do with how one interacts with people, and this is a pretty good indication of that.
Email ThisBlogThis!Share to TwitterShare to FacebookShare to Pinterest
Labels: Humor, Pope Francis, Religion