The disaster that is Corporate America 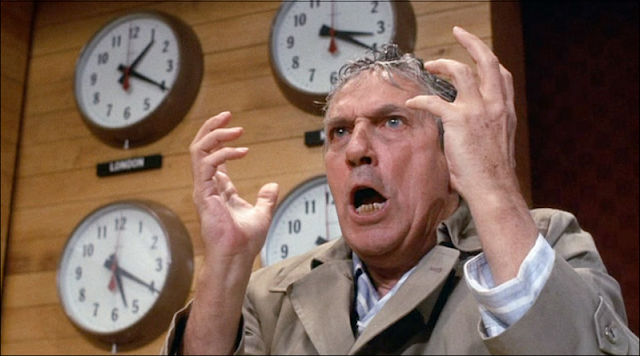 Hi everybody, and welcome back! Oh wait, I'm the one who's been gone! In that case you should be welcoming me back.  Or maybe not, depending on what you think.

Anyway, last month I ran across an interesting article from Rod Dreher, who can be equal parts depressing and fascinating, and this one is probably both in that it gives us an insight into the moral corruption of Corporate America, which is fascinating, but because of that it also paints a dim picture of the future, which is depressing. It comes from video of a talk by Patrick Deneen, which you should definitely watch when you have the time, but since I'm already a month late with this post, I'll share the same quotes that Dreher did - it got Mitchell going when I showed it to him (he hadn't seen it yet), and if you feel the same way we do, it will likely get you going as well.

It begins with Deneen discussing how big business leaped on the homosexual "rights" bandwagon so quickly after Indiana passed RFRA last year, the bill that allowed companies to "assert that their exercise of religion has been, or is likely to be, substantially burdened as a defense in legal proceedings." (H/T Wikipedia.)

There is a deeper reason for corporate support [of gay rights laws], however. ­Today’s corporate ideology has a strong affinity with the lifestyles of those who are defined by mobility, ethical flexibility, liberalism (whether economic or social), a consumerist mentality in which choice is paramount, and a “progressive” outlook in which rapid change and “creative destruction” are the only certainties. The response to Indiana’s RFRA law shows very clearly that corporations have joined forces with Republicans on economic matters and Democrats on social ones. Corporate America is aligned with the ascendant ­libertarian portion of each party, ensuring a win for the political, economic, and ­social preferences of libertarianism. In effect, there is only one functional party in America today, seemingly parceled between the two notional parties but in reality unifying them in its backing by financial and cultural elites.

What this means is that today’s cultural power elite is entirely aligned with the economic power elite, and they’re ready to steamroll anyone in their way. In the case of Indiana’s RFRA, corporate and gay activists combined to bring to heel conservative Christians in a rural, Rust Belt state that struggles at the margins of America’s global economy. The threat to demolish Indiana’s economy is only a more explicit expression of a project that corporations like Apple and Walmart have been carrying out with the ­assistance mainly of Republicans (as well as free-trade Democrats) for a generation.

To see the glee with which ­liberals joined forces with corporations revealed the deepest fact about the American ruling class: politicians and corporations will join forces to effect the change preferred by corporations, change that too often damages the working class and benefits society’s elites. Corporate America is willing to join any coalition that advances its financial interests and deeper philosophic commitments, at the expense of Americans on the wrong side of history, especially those Americans living in places like Indiana who aren’t part of the meritocratic global elite.

Americans of both parties once believed that no center of power in America should become so concentrated that it could force its views on every other citizen. What we saw in Indiana was not just a “miscalculation” by Republicans. We saw fully unmasked just who runs America, and the kind of America that they are bringing more fully into reality every passing day. It will be an America where the powerful will govern completely over the powerless, where the rich dictate terms to the poor, where the strong are unleashed from the old restraints of culture and place, where libertarian indifference—whether in respect to economic inequality or morals—is inscribed into the national fabric, and where the unburdened, hedonic human will reign ascendant. No limits reflected in political, social, or religious norms can be permitted: All are allowed except those who would claim the legitimacy of restraint.


What's most interesting about this is that large companies, and here I'm thinking back to the era of Robber Barons, have frequently tried to deny their desire to control the lives of Americans in order to achieve a bigger profit. They use a lot of fancy words, but they would never admit what they're really up to. But now they flaunt it in front of us, daring us to do something about it.

The effrontery of their arrogance is breathtaking, or at least I would have said that a few years ago. I suppose at least they honor us by not being so condescending with their denials that they insult our intelligence. The idea that they can pronounce who is and isn't on "the right side of history" is laughable, except that they have the power to say it and then enforce it. They've come out of the closet (so to speak) as elites who not only fully believe they know better than you, they'll tell you that and then dare you to stop purchasing their product.

This also confirms what I've been saying for years, which is that Republicans and Democrats are really two sides of the same coin. The only difference between the two, I suppose, is that the Democrats don't really have a grass-roots opposition in the same way that the Republicans do. The fringes of the liberal left want to make the Democrats even more leftist, whereas there are at least a few conservatives out there trying to reign in the Republicans and get them to see that big business is not their friend, that in fact the only friends they have are the American people themselves, and they'd better be careful how they treat them.

It's part of why Donald Trump continues to defy the political experts, why he continues to dominate the Republican side of the presidential race. Now, it may be true that Trump is part of that big business cabal that's trying to run everything; I don't think so, but the point nonetheless is that you've got someone out there saying, in essence, "FU!" to the elites, be they from politics, media or business. That's what a lot of us are thinking right now, and if The Donald isn't the one to fix it, at least there's someone out there besides Howard Beale who has the guts to stand up and say he isn't taking it anymore.
Email ThisBlogThis!Share to TwitterShare to FacebookShare to Pinterest
Labels: Corporate America, Homosexual Lobby, Politics