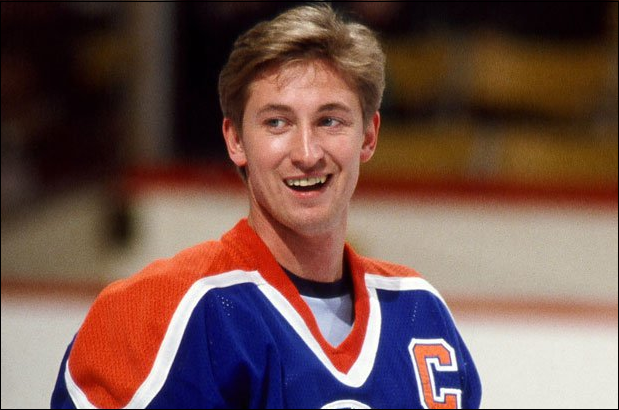 Wayne Gretzky is now 55, same age as me, and it just doesn't seem possible. When he first appeared in the NHL, as something unlike which we'd ever seen, I never thought of him as being the same age. He was young, unbelievably young; a superstar while still a teenager. And yet the age similarity didn't compute; John Updike once wrote famously of Ted Williams that Gods do not answer letters, and I suppose there's something of that in this: mortals do not compare their ages to Gods. I never got to see him play in person, but even though our television coverage of hockey was woefully inadequate for much of his time in the game*, everyone knew about him - even non-hockey fans.

*Not that there aren't plenty of highlight reels of him; it was only living in the Twin Cities that our television coverage suffered, thanks to our lack of cable for so long. On the other hand, it also means that whenever you search him on YouTube, he'll take your breath away.

Joe Posnanski wrote about Gretzky as the greatest, in a way that's undefinable in terms of statistics or records or grace - it's worth sharing because, ultimately, there is no other way to describe him, not even as Paulina's father.

He was a child prodigy who, like Mozart, defied the rules of gravity in his craft. He imagined a new way to play. Sure defenses are tougher now, and goaltenders are better now, and he might get roughed up a bit more. But so what? Gretzky always found a way. Geniuses are like that.


We'll just leave it at that, I think.
Email ThisBlogThis!Share to TwitterShare to FacebookShare to Pinterest
Labels: Hockey, Wayne Gretzky