Throwback Thursday: The buzz that lingers 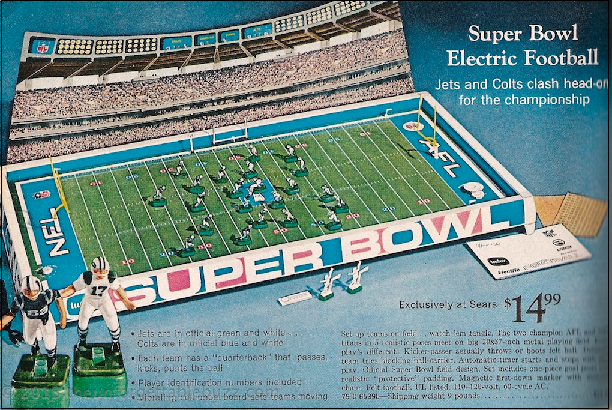 If you were like me growing up (and, as I always say, you should have been), you remember electric football - the game with the vibrating plastic men who never went where you wanted them to, instead congregating on the sidelines against the board's edge - or, even worse, running the wrong way into the opponent's end zone.

The Tudor game pictured at left was the second electric football game I ever had, and the first one to have real teams, instead of the generic red and white teams.  This one had the Cardinals and the Bears, and included spare holes in the end zones so you could move the goal posts from the goal line (where the pros had them at the time) to the back of the end zone, for the college version.  (Although why you'd want to use college rules for NFL teams was always a mystery to me.)  For me, the real fascination with the game lie in the externals - the simulated cardboard stadium, the design of the field, the helmet logos on the side of the board, and the different teams you could buy.  I had my share of games over the years, each one of them with its unique characteristics, and although none of them played very well, I loved them all just the same.  The games have long since disappeared from the household, but they've also disappeared from the stores, a victim mostly of our continuing obsession with the latest technology.  When you can recreate games and leagues with a computer, why bother with a three-dimensional game that doesn't work very well?

My interest in them has always remained, though (as hours of trolling around eBay would attest), and so I found this article (h/t Uni Watch) of great interest, telling us of efforts to revive the electric football industry.  I know I'm not alone in my affection for the game, as this book and website show, and I really hope Doug Strohm's efforts to get the NFL merchandising license pan out.  The games have improved over the years, and besides, there's something so - social about it all.  It's not sitting in front of the screen for hours; it's something you do with other people.  It's something you can be part of in ways other than simply pressing buttons.  And I wish them all the luck in succeeding.

By the way, that game pictured on the Unforgettable Buzz website?  It was one of the great games ever made, a Tudor special edition for Super Bowl III, as the logo and the teams would indicate.  It was the first to be specially made with the Super Bowl logo and markings on the field, and it was the first game to feature an AFL team in white uniforms (previously, NFL teams came in both dark and white jerseys, but AFL teams were dark only).  I had this game, and although the Colts may have lost the real Super Bowl, in my version they beat the Jets every time.  Of course, I can't promise that I didn't help the players out a little from time to time...